Any attempt to intimidate the media into submission or compliance puts democracy at grave peril. Any move to compel the press to genuflect before power is an assault on the fundamental principles of democratic accountability upon which the People's Republic of Bangladesh was founded close to half a century ago.
When readers of the Asian Age were unable last week, for 96 hours, to access the online version of the newspaper on their mobile phones, the worry was simple: somewhere someone in authority was unhappy with its reporting.
When a few weeks ago, bdnews24.com found itself blocked on the internet for some hours, the worry was, again, simple: someone was indignant with its style of functioning.
When, further back in recent times, the Daily Star was made inaccessible on the internet for 18 hours, the worry could not have been simpler: someone somewhere was wielding non-transparent authority in trying to browbeat it into silence.
None of these three attempts made on the media in recent weeks turned out to be enduring because of the public outrage they aroused. But they have left a bad taste in the mouth. The omens are not good.
In what we have repeatedly been told is a digital era we live through in Bangladesh, that we are on the global information highway, these three instances of trying to frighten the media into cowering submission were clear moves to have Bangladesh sail against the wind, considering that in this day and age information cannot be kept concealed or be pushed under the rug.
The truth will out and those who are uncomfortable with news related to the larger public interest reaching out to people must not operate in the erroneous belief that journalists will fall silent before a demonstration of fear.
The media do not do a 24-hour job to make people happy or to rouse them to anger or to pander to their whims. The media are not rabble-rousers; they do not presume to challenge political authority nor are they to be considered enemies of the state.
The media, in plain and stark terms, are there to place before citizens realistic images of the country they inhabit and, in greater measure, of the world they are part of.
It is the moral responsibility of the media, print as well as electronic, to spot wrong and let people know of the elements behind the commission of the wrong, to throw light on corrupt and dangerous men and women and let citizens become aware of the damage they are capable of inflicting on society and the State.
On a bigger scale, the media delve into the dark recesses of human behavior --- political, professional and institutional --- in order for the powers that be to take remedial measures and satisfy people that the State and those who govern it care about the welfare of the millions who constitute this republic.
But when faceless elements clamp down on the media, have their online versions shut down without any explanations, without so much as letting the management of the affected news organizations know why they are being shut down, one is terribly disturbed in the knowledge that such acts violate the tenets of democracy.
Hours or days later, when BTRC decides to lift the curbs placed on the media, it has nothing to say as to why it had acted against the media outlets in question in the first place or who had directed it to bring the hammer down on the Daily Star, bdnews24.com and the Asian Age.
The Ministry of Information remains eerily silent, almost giving out the feeling it has ceased to exist. No briefing from the government comes forth to explain that inexplicable ban on accessibility to the online versions of the victimized media. A wall of silence goes up between the authorities and the media.
It does not help the State. It certainly drills holes in the reputation of the government, especially in a year where it happens to be preparing for a fresh spate of general elections in the country.
Clamping down on the media without notice and without explanation places Bangladesh's diplomatic missions abroad in embarrassing conditions: they are left red in the face when confronted with questions on the ban from the media in the countries they are based in. They mumble in response, but mumbling is not an answer.
It should not be the job of the government or the institutions of the State to send fear through the media by shutting them down on the internet. Individuals or organizations aggrieved by news reports or editorial comments have the rules laid down on what they need to do in response: they can send rejoinders to the media, which will be duty-bound to carry them --- and they can file complaints with the Press Council. Ignoring these processes betrays an instinct that does not bode well for the future of political pluralism in the country.
Let such knee-jerk reactions to media activities come to an end. We do not live in a dictatorship. We do not operate in the fearsome shadow of a non-elected government. Why then must some people undermine our efforts to build a fully working democracy by trying to sow fear in the hearts of our journalists?
The writer is Editor-in-Charge, The Asian Age 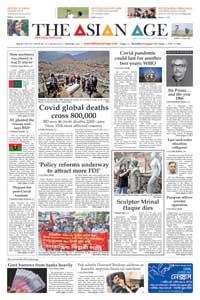