Inclusive development and the victims of river erosion After an hour's motorbike journey we reached at Kapasia union Parishad headquarter at Sundarganj upazila (subdisrict) in Gaibandha, a northern district of Bangladesh. Another twenty minutes walk through the earthen road took us to the Kheya (ferry) ghat at the bank of river Teesta(or Tista).
We were lucky to get the engine (ferry) boat to reach other side of the river. If we didn't get the ferry boat timely we had to wait for almost an hour to get the next ferry. The river in the mid of May looked vibrant with strong current and whirlpool in the water. The marks of erosion in land along the river were easily noticeable.
As the lands are getting eroded at the end of mainland the other side of the river is getting new lands and the landless people who become victims of river erosion starts their life anew on the newly formed area which is known as Char. "Major part of our union is on the Char, and we are known as char people to the outsiders" Said Naba Ali (90) a passenger of the boat. With an area of 33 square kilometers, Kapasia union has population of around 19,000 in 12 villages.
The field of young jute plants welcomed us to the char. The char in this part is called kajiarchar and it is within the village Vatykapasia, which is one of the 12 villages of Kapasia union. We followed Nabab Ali through the alley in the jute field. Sometimes the alley went down to low land which gets filled up with water during rainy season. His life story was unfolding the ever changing features of the char.
"My forefathers came here from Tangail, a district at the downstream and far distance from here. They came here due to poverty and to try their destiny here. But rivers erosion didn't make them happy and for me it was more than 30 times that I had to change my residence due to river erosion," told Nabab Ali.
We reached at Rajar char adarsho bazaar (or Ahmednagar adarsho bazaar) the only market place in the char. We met people of different ages from different villages. All of them were landless and had settled down here after getting displaced from their land several times by river erosion.
There is no grid electricity supply in the char and a very few households get electricity from solar panel. We didn't see good number of trees which become natural shield against storm and other disasters. The roads are earthen and during flood and rainy season the villages get cut off from each other by water. Raja Miah (38), a victim of river erosion for more than ten times and now has been settled with a shop of agricultural materials described the lives and livelihoods of the Char, "Most of the people of this char are landless and wage earners. A few are share croppers.
Agriculture is our main livelihood. However earnings from agriculture last for six months. We get waterlogged for almost five months (June-October) due to flood in rainy season but in case of flash flood water logging starts from April and May. During this period our people become jobless. They have to largely depend on money lenders for their survival. Some people go outside of the area for earning."
However they also told that the situation has little improved in last ten years with the introduction of boro paddy cultivation in the months of February to April. Now they can harvest paddy before the early or flash flood. They also cultivate maize, jute, peanut which also brings them good profit. But they complain that their efforts are not well supported by the concerned authorities and institutions. Abdul Jalil (75), an elderly person of this locality explained how difficult it was to manage loans for Boro cultivation.
"Boro cultivation requires a good investment at various stages ranging from tilling of land to harvesting of crops. But we are not eligible for bank loan since we are landless and we are likely to change our residence frequently due to river erosion. We don't have much NGO activities here. We have to depend on moneylenders for loans at high interest rate. A major part of our profit from Boro and other cultivations goes to money lenders' pockets." 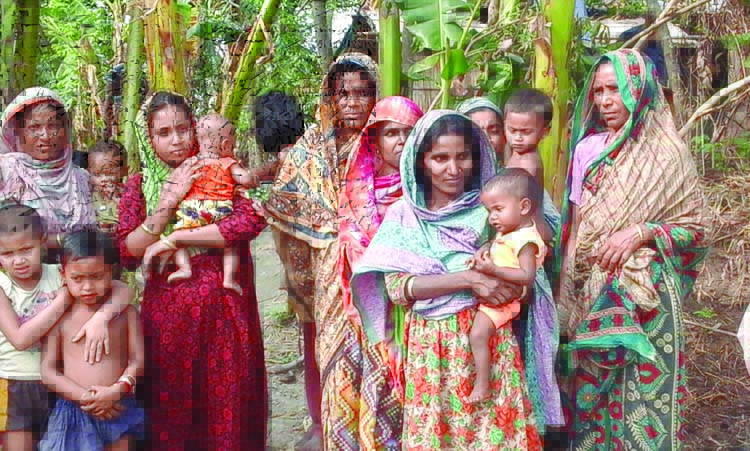 We took a walk in the nearby Kajiarchar Abashon prokolpo (rehabilitation project for landless people and river erosion victims) village where around 160 families have been living in the government sponsored houses. We found mostly female members in the village and came to know that male members were at outside of the village for earning. Ayesha Begum (40), a resident of this village explained how they pass their lives here, "We live on wage earning. Both male and female members of our village work in the crop fields and with the income from this work we can somehow manage our family expenditure for at best six months.
We are also engaged in rearing cows and goats which we get from the well off people mostly from the mainland on the condition of profit sharing. But when water starts flooding our area our earnings goes down. We pass very hard days during this period in every year. We usually borrow money from moneylenders for survival at high interest rate- Taka 100 as monthly interest against Taka. 1000."
The female members and children whom we came across in the in the char were not in good health.
Their daily food intake includes rice, vegetable, smashed potato, eggs for sometimes in a month and a very few times they can have fish let alone meat. But a big reason that Nurunnahar Begum (32), a resident of this rehabilitation project told us that, in char child death is a big concern for them and that is why they have to take more children. Coupled with this, the expectation of son also leads to the increase of family members.
And we understood why the female members were looked much older compared to their ages. Getting proper medical treatment is a big challenge to the villagers. "We have a community clinic here but we don't get our expected services from it. And for any emergency health situation and improved medical treatment we have to go far-at Upazila and district headquarter, which is very expensive for us," said Nurunnahar Begum.
Children are also deprived of congenial environment for their childhood development. Md. Razzak(45) of this village described the situation, "Here our children can only avail primary level education. But those are not adequate for the children. And after primary level education children pass unproductive times. Some of them get engaged in income generating activities and the girls are in most cases got married at early ages." This situation only suggests a poor literacy rate (around 30%) of the Kapasia union which is much lower than the national average.
Mr. Zillur Rahman Khandker, executive director of Uddyog Foundation, a local NGO which has been engaged in development programs and micro-credit operation in this locality explained the challenges and prospects of the char people, "We need more accountable and functional role from our concerned government departments as well as development partners for the development of these people.
The local people are taking some innovative steps in crop diversification, livestock and livelihood development on their own but a coordinated and effective monitoring system involving all actors is essential to sustain these efforts."
Md. Jalaluddin, chairman of Kapasia Union gave emphasis on increasing of resource allocation, social safety net programs and special programs from government and NGOs for the people of his union. He said, "My union is highly exposed to river erosion, flood and storm. Around 90% of the area of this union is on the char land. And the people need more supports for their overall development. We need more quality educational institutions.
Community clinics need to be improved with good services including adequate supply of medicine and regular visit of doctors. Moreover lacks of occupational diversity hold back the people in poverty. Concerned government departments as well as NGOs should come up with skill development trainings and material supports for these people."


Shekhar Kanti Ray is a development professional and researcher. He can be reached at [email protected]