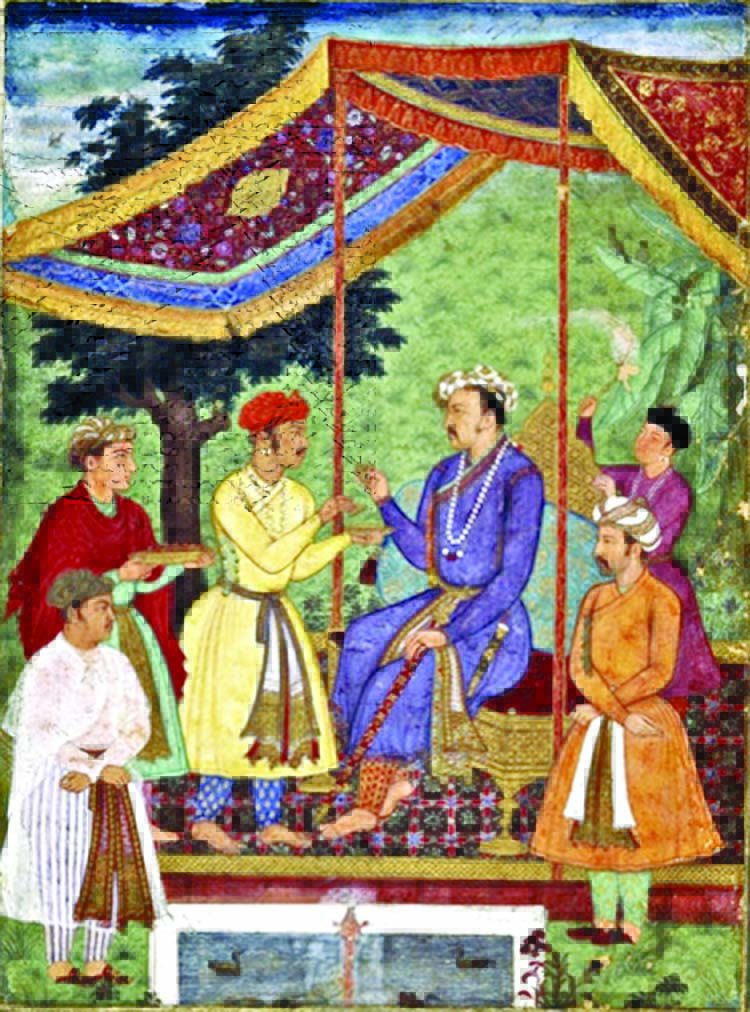 At that time Jahangir's final wife Nur Jahan was the one pulling the strings at court. Smitten by her beauty, intelligence and love, the emperor had more or less given over all control of his life to his wife. She was the mastermind behind his decisions, whispering her ideas into his ears in bed, and the emperor acting accordingly in court. In an attempt to retain control over her empire and her volatile son Khurram, Nur Jahan asked for Khusrau's hand for her daughter from her first marriage Ladli Begum.
The offer was simple; Accept and live a life of luxury and freedom, one where she would throw in her weight for his succession of Jahangir, or refuse and be handed over to his brother Khurram, at whose hands his death was guaranteed. But the prince shocked both Nur Jahan and her brother and his then custodian Asaf Khan when he refused. In a time of polygamy, Khusrau refused to forsake his wife who had stood by his side when no else had. Regardless of being offered a retreat from his life of despair, he refused to spoil the sanctity of the bond he had formed with his wife. Angered by the unshakable prince, Nur Jahan stopped the thwarting of his transfer to Khurram, and Khusrau was soon in his brother's custody.
The ill-fated prince finally met his end in January 1622. Although no properly backed account exists, the most popular one is that a servant of Jahangir's named Raza Bahadur attempted to enter Khusrau's chambers in the middle of the night. When Khusrau refused him entry, Bahadur broke the door and rushed in with his accomplices and attacked the prince. Khusrau screamed out to wake his servants and despite his partial blindness, fought bravely but to no avail. He was strangled to death and his bed rearranged afterwards to make it appear as if his death was natural.
Khusrau's body was temporarily buried in Burhanpur and on January 19th Emperor Jahangir was told that his son had died naturally of colic pain. Enraged, Jahangir ordered his body to be exhumed and sent to Allahabad. A mausoleum was built over his grave next to his mother's in a place now called Khusrau Bagh.There were outcries throughout the empire that the famous prince had been murdered in cold blood. There were calls of vengeance against the slayers of the people's favourite. The wheels of a movement that proclaimed Khusrau a martyred saint soon started spinning and shrines were built wherever his body had rested on its way to Allahabad.
A confused Jahangir ordered his son Khurram to appear in court. As difficult as it was for him to forgive Khusrau's rebellion, he had nonetheless grown fond of his son near the end. Khurram openly refused his father's command and started yet another rebellion for the throne in the Mughal empire.
Khusaru was a proficient prince, but he was surrounded by highly ambitious and deceitful family like Nur Jahan, Khurram, Jehangir etc. Although pushed to centre stage by Akbar himself, he could not continue his support for his grandson near his end. Loved by his people, Khusrau was made to pursue something which would have never been his. Maybe the lesson to learn here is that military men might win you battles, but diplomacy and politics will win you a throne. Khusrau might have been the most talented commander in Akbar's army, but it was his inability to win the fights in Akbar and Jahangir's court which cost him his life and throne.