Natore Rajbari (also known as Pagla Raja's Palace) was a prominent royal palace in Natore, Bangladesh. It was the residence and seat of the Rajshahi Raj family of zamindars.   Famous queen Rani Bhabani lived here and after the death of her husband expanded both the estate and the palace.
This great woman was born in 1122 at the village "Adam Dighir Chhatiyana" of Bogra district. During the period of Rani Bhabani, the Rajshahi, Pabna, Bogra, Kushtia, Jessore, Rangpur, and Murshibad, Beerbhum, Malda of India was under her. That's why she was called the "Ordho Bongeswari"(half of the ruler of Bengal). Her palace is situated at the main town of Natore, and it's a lovely place for the tourist.
The Natore dynasty is regarded as one of the most powerful and unified empires of the 18th century in this region. In 1706, contrarily in 1710, Raja Ramjiban became the first king of the dynasty and he built his Rajbari at Natore on an area of 50.42 acres of land that is enclosed within two rings of moats as a part of the defensive system. He governed up to 1734 AD and died that very year.
After his death, his adopted son Raja Ramkanto became the king and got married to Rani Bhabani in 1730. When Ramkanto died, Nawab Alibordi Khan handed over the responsibility of the zamindari to Rani Bhabani who expanded the empire further. 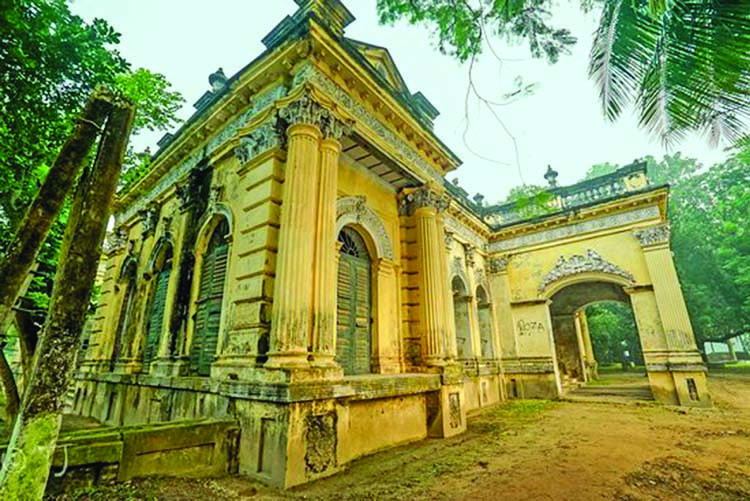 The present palace of Natore is situated in the centre of the district on a total area of about 120 acres.This once-stunning structure was equipped with different elegant features in its architecture like the massive gateways, large tanks, orchards, courtyard, ponds, canals, and temples.
Different features like the geometric and floral panels in plasterwork on the façade, the clerestory windows originally fitted with colored glass panes, the classical nude female sculptures, the series of Corinthian columns and semi-circular arches in the typical classical Roman style, the spiral iron staircases, and the black and white marble floor will surely take you back to that period.
The total area of the Rajbari is divided mainly into two parts- Baro Taraf and Chhoto Taraf. It also has buildings like the Rani Bhavan, Kachari Bhavan, Guest House, Madhu Rani Bhavan.
Boro Taraf, the main palace block, is now used as the Deputy Commissioner's office which faces a large open lawn to the south. The Natore Rajbari is one of those treasures of the past that demand care and preservation.