A restaurant worker seen busy cutting mother Hilsa fish which are full of eggs inside. The photo was taken from the kitchen of a restaurant in Barishal on Tuesday. -AA
Barishal fish market was flooded with mother hilsa after visiting Barishal kitchen markets it was found that most of the hilsa offered of selling those were bearing eggs.
Around 10 thousand mounds of hilsa have been reached in Barishal hilsa and kitchen markets and most of those mother hilsa carrying eggs, acknowledged Dr. Bimal Chandra Das, district fishery officer (DFO) after visiting local kitchen and wholesale fish markets.
He said hilsa fish lay eggs round the year, but September-October (Ashwin-Kartik) is their peak of their breeding and spawning season. So large number of mother hilsa found with eggs in the month of Ashwin (October). Hilsa follows the lunar-based rotation of season for breeding.
This year, the ban period increased to 22 days from 15 days which included four days before the first full moon and ends 7 days after the new moon of Ashwin-Kartik month, said Abu Sayed, DFO, and Barishal. However we observed after ending ban period most of the hilsa, even the small one, also  found carrying eggs, which means hilsa started conceiving just few days before ending ban period,  he added.
We sent our observation report to higher authority to search their investigation about breeding time of this species of fish, the DFO told.
Md. Shah Alam, one of fishermen came from Mehendiganj at Barishal wholesale hisla market said that this year rain delayed to start and so breeding season of hilsa also delayed to last time of the season. This change of weather made hilsa to start breeding after end of imposed restriction period.
Generally after end of ban period a few number of mother hilsa netted by fishermen.  But this year most of the hilsa carrying eggs make us astonished, said Ali Husain, a fisherman of Charfession Upazila under Bhola District.
Hilsa breeding time may be changed adjusting to climate change effects and other circumstances in the weather, he added.
Ajit Kumar Das, President Barishal Matso Arotdar Samitee, said founding huge number of mother hilsa in Barishal market, may show the signs of change of breeding time table and season of hilsa.
---Masuk Kamal, Barishal 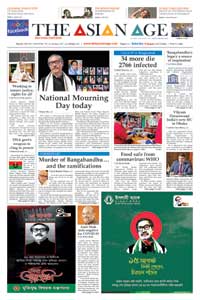