Qassem Soleimani traveled with impunity - until US drones found him Qassem Soleimani in 2016. -AP
One night in January of 2007, American Special Operations commandos tracked a notorious adversary driving in a convoy from Iran into northern Iraq: Maj. Gen. Qassem Soleimani, Iran's top security and intelligence commander.But the Americans held their fire, and Soleimani slipped away into the darkness.
"To avoid a firefight, and the contentious politics that would follow, I decided that we should monitor the caravan, not strike immediately," Gen. Stanley A. McChrystal, the head of the secretive Joint Special Operations Command, recalled in an article last year.
But early Friday, a U.S. MQ-9 Reaper drone from McChrystal's former command - operating under President Donald Trump's orders - fired missiles into a convoy carrying Soleimani as it was leaving Baghdad's international airport.
Tracking Soleimani's location had long been a priority for the American and Israeli spy services and militaries, especially when he was in Iraq.
Soleimani often traveled with an air of impunity, as if he felt he was untouchable, officials said. One former senior American commander recalled parking his military jet next to Soleimani's plane at the Irbil airport in northern Iraq.
Current and former American commanders and intelligence officials said that Friday morning's attack drew specifically upon a combination of information from secret informants, electronic intercepts, reconnaissance aircraft and other surveillance tools.
The highly classified mission was set in motion after the death of an American contractor on Dec. 27, a senior American official said.
Trump's decision to kill Soleimani was one that Presidents George W. Bush and Barack Obama had rejected, fearing it would lead to war.
McChrystal praised Trump's decision to try and kill the Iranian commander now.
"The targeting was appropriate given Soleimani's very public role in orchestrating Iranian attacks on the U.S. and our allies," McChrystal said in an email.
But the general added a somber warning: "We can't consider this as an isolated action. As with all such actions it will impact the dynamics of the region, and Iran will likely feel compelled to respond in kind.
"There is the potential for a stair-step escalation of attacks, and we must think several moves ahead to determine how far we will take this - and what the new level of conflict we are prepared to engage in," he said.
U.S. military officials said they were aware that Iran or its proxy forces potentially could respond violently, and were taking steps to protect American personnel in the Middle East and elsewhere around the world. They declined to provide details.
"I can only hope that embassies and consulates across the region were put on heightened alert in the last 48 hours or more," said Barbara A. Leaf, a former U.S. ambassador to the United Arab Emirates who is now with the Washington Institute for Near East Policy.
"That said, I would be surprised to see the Iranians respond quickly to this," Leaf said. "Once the regime has recovered from its initial shock, it will take its time plotting reprisals. And reprisals there will be, most likely in Iraq first. But our Gulf partners should worry as well - assassinations, strikes on shipping and energy infrastructure."
In the end, Soleimani's brazenness may have been his undoing. Unlike terrorist leaders like Osama bin Laden and Abu Bakr al-Baghdadi, Soleimani often operated in the open.
"Soleimani was treated like royalty, and was not particularly hard to find," said Marc Polymeropoulos, a former senior CIA operations officer with extensive counterterrorism experience overseas who retired last year. "Soleimani absolutely felt untouchable, particularly in Iraq. He took selfies of himself on the battlefield and openly taunted the U.S., because he felt safe in doing so."
A senior American official said that the administration's hope was that the killing of Soleimani would force Iran to back down after months of assertive behavior, much as Tehran backed down from rapidly escalating hostilities during the oil tanker wars of the 1980s.
The officials said there was worry among the president's senior advisers that Trump has indicated so many times that he did not want a war with Iran that Tehran had become convinced the United States would not act forcibly.
But the official, who spoke on grounds of anonymity, acknowledged that the assassination of Soleimani was a huge risk for Trump and could just as likely prompt an outsize reaction from both Iran and Iraq.
"Iran has a lot of levers to pull too," warned Derek Chollet, who served as an assistant secretary of defense in the Obama administration. "So much for ending 'endless wars.'" 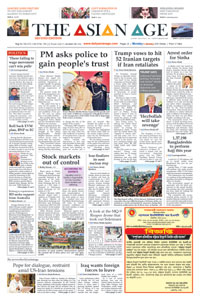