The temperature will likely drop further after a light rain or drizzle in parts of Bangladesh on Thursday, the Bangladesh Meteorological Department (BMD) said.
Bazlur Rashid, a meteorologist at BMD, told UNB that moderate to thick fog may appear between midnight and morning.
In its regular weather update, the Met Office said drizzle is likely to occur at a few places over Rajshahi, Dhaka and Sylhet divisions and at one or two places over Rangpur, Khulna, Barishal, Mymensingh and Chattogram divisions.
Night and day temperature may fall slightly all over the country.
Also Read-  Panchagarh temperature dips to record 4.5˚C
Cold-related diseases affect 5,852 people in 24 hrs
Bangladesh’s northern region has been shivering in an ongoing cold wave. The season’s lowest temperature was recorded in Panchagarh’s Tetulia at 4.5 degrees Celsius on December 29 last year.
People, especially children, the old and day labourers, are suffering the most.
During this winter, the government reported 51 deaths from cold-related diseases, 10 of them in Panchagarh. Since November 1 last year, as many as 3,38,809 have been affected by cold-related diseases, the Directorate General of Health Services said in its regular update on Wednesday.
Dense fog, meanwhile, has been disrupting ferry and launch operations on key river routes across Bangladesh and led to a number of accidents on the highways.
The cold wave has also turned into a headache for farmers who say they fear losing crops if the weather persists. 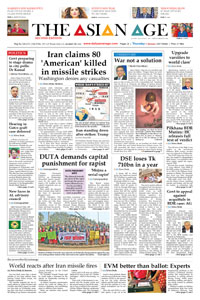