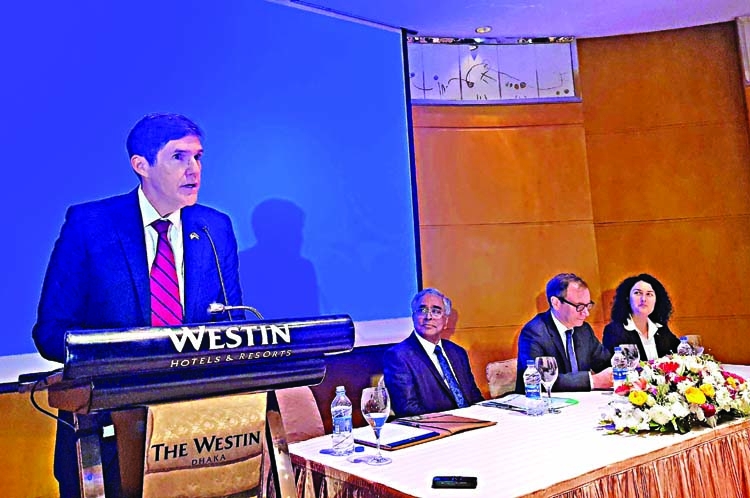 US Ambassador to Bangladesh Earl Miller addressing the inaugural program of a workshop on digital evidence in the city on Monday. -US Embassy
US Ambassador to Bangladesh Earl Miller, British High Commissioner in Bangladesh Robert Chatterton Dickson, and Honorable Chief Justice of Bangladesh Syed Mahmud Hossain opened a four-day workshop entitled "Dialogue on the Use of Digital Evidence in Court" on Monday.
The jointly sponsored US-UK workshop, organized by the US Embassy through the US Department of Justice, will be conducted by two US Federal Judges and three Federal Prosecutors, a UK Criminal Justice Advisor and a Dhaka University law professor.
Participants have been invited from tribunals where digital evidence is currently permitted under certain circumstances, including Anti-Terrorism Tribunals, the Cyber Crimes Tribunal, Speedy Trial Tribunals, and the planned human trafficking tribunals, say a press release of the US Embassy.
Representatives of the Ministry of Law, Justice, and Parliamentary Affairs were also invited to better understand the challenges judges and prosecutors face under the Evidence Act of 1872 as it relates to the use of digital evidence in court.
The Honorable Chief Justice of Bangladesh, Syed Mahmud Hossain, attended the opening ceremony as the Chief Guest. Ambassador Miller said that there is widespread support in the Bangladeshi justice sector for using digital evidence as it would significantly increase the credible evidence available to prosecutors and judges, help solve crimes more quickly, and reduce the backlog of cases.
British High Commissioner  Chatterton Dickson expressed his support for the enhanced use of digital evidence in the Bangladesh justice system, noting that if used properly it can play a major role in increasing the efficiency and integrity of judicial administration.