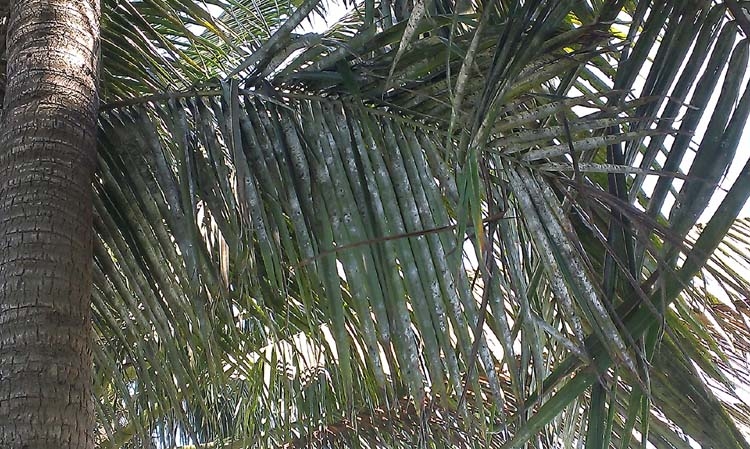 Coconut trees being infected by Rugose Spiraling Whitefly in Pabna, Panchagarh and Gazipur district. Scientists of BARI discovered and recorded this pest attack since April of 2019. -AA
The scientists of the Entomology Division of Bangladesh Agricultural Research Institute (BARI) first identified the invasive insect pest Rugose Spiraling Whitefly (Aleurodicus rugioperculatus Martin) in Bangladesh. Scientists observed this species, which is a new exotic Whitefly, in coconut trees at Regional Agricultural Research Station (RARS), BARI, Jashore, in April 2019, which was the first report of its occurrence in Bangladesh.
By this time, BARI Entomologists have recorded this pest attack in coconut trees from Magura, Pabna, Panchagarh and Gazipur districts. Although the pest is native to Central America, in 2016 it was reported from India infesting coconut trees. Worldwide, this whitefly has been reported on more than 60 plant species, but it prefers coconut and other palm trees, banana etc. However, farmers should not be panicked due to infestation of this pest.
To resist this pest attack, Chief Scientific Officer (CSO) of the Entomology Division of BARI Dr. Debashish Sarker advised the farmers not to spray toxic chemical insecticides indiscriminately as this practice would kill the beneficial insects those naturally control this pest resulting the pest problem to be more severe.
Different bio-pesticides especially Neem based bio-pesticides e.g. Fytomax, Bioneem plus etc. can be sprayed at recommended doses to control this whitefly. In case of severe infestation, less toxic new generation chemical insecticides can be sprayed with the consultation of local agricultural extension personnel.
---Mahbubbul Alam, Gazipur