After empowerment, freedom and dignity

The aspirations of women in India have evolved. Policy, public discourse must keep pace 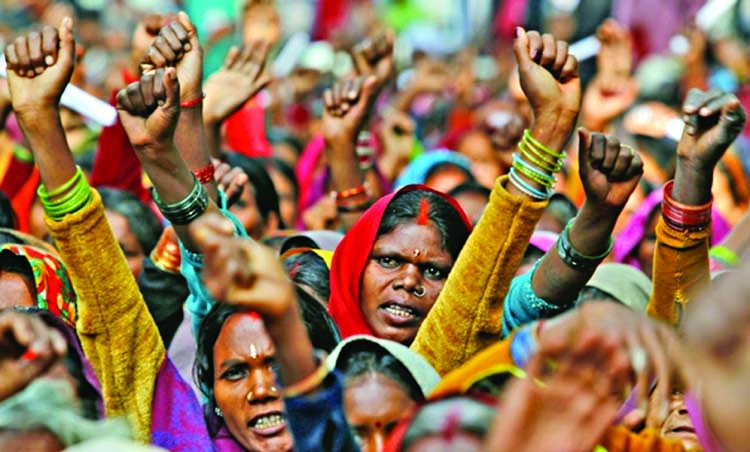 Ram Madhav
The problem with some policies is that they are at least a decade behind the thoughts and aspirations of the people. Unless we address this mismatch, seemingly noble policies also fail to do justice to the targeted sections of the population.
Take, for example, the aspirations of sections like SCs, STs and women. Today, the aspiration of the downtrodden is not just about power-sharing but a share in decision-making. Through various policies we have addressed the issue of power-sharing. But did it lead to them reaching decision-making positions?
Similarly about women, the discourse fashionable today is about empowerment. What does empowerment mean? We assume that the aspiration or desire among the women is for positions on par with men. Our policies are structured in that direction. We hardly realize that while it is fashionable to showcase these things as our commitment to women's empowerment, the aspiration discourse has gone much farther.
The urge and aspiration among the women today is for dignity and freedom. Any further talk of empowering women will be seen as condescension because empowerment is today seen as entitlement. We need to rise to the current sentiment - of empowerment with dignity and honor.
Women are in commanding positions in many areas of private and public life in our country. Even in rural India, women are greatly empowered through their presence and positions outside the four walls of their homes. Initially, this change needed support and prodding but now it is on an auto mode.
Yet, the challenge of dignity and freedom remains. The empowerment that we talk about has certainly given them positions, but not necessarily the dignity and freedom that they deserve. Social media is a good test case, since it is a truly democratic media. It reflects human behavior through an unadulterated, unedited prism. It is here that one comes across extreme forms of deprecating behavior with respect to women. In varied degrees, this prevails in all walks of life.
Our laws, societal norms and customs need to be looked at from this new reality. There was a time when women needed protection. We built laws and institutions keeping that need in mind. It was felt later that women needed empowerment. We addressed that need too. But today's need is to revisit our polity to accord dignity and freedom to our womenfolk. Mahatma Gandhi used to say that real independence would be when a woman in this country can walk around on the streets alone at midnight.
An easy way to think of this would be from a security perspective. But another interpretation could be about dignity. How does society look at a lone woman roaming the streets at midnight? Just like how it looks at a man in similar circumstances or with suspicion, if not disdain? Does she enjoy freedom of choice or is she branded promiscuous?
This brings up the crux of the issue. Can a woman be respected just as a woman, without any strings attached? Or she will be respected only when she is a "mother" or "sister"? Is her freedom and self-expression equal to that of a man?
There is an instructive anecdote in the Shanti Parva in Mahabharata. Yudhishtir, having won the war, approaches Bhishma, who is on the bed of arrows awaiting death, seeking advice on statecraft. Draupadi, the feisty princess, was passing by, and laughs out loud. Yudhishtir remonstrates; but Bhishma stops him and submits that Draupadi's laughter was valid. "In a full House, when she was being disrobed, I remained a mute witness. Am I today qualified to teach you Raj Dharma?
That is what Draupadi's laughter meant," says Bhishma. The Indian approach to womanhood is replete with messages that accord dignity and freedom to women, not just a higher pedestal. Manu is criticized for talking about the duty of the society to protect women. But Manu also grants women the right to divorce under four different circumstances.
Women face two extremes in our society. At one end is the vulgarity of objectification. The higher a woman rises the greater the objectification becomes. How they appear, how they dress and how they style their hair or wear their footwear becomes the subject. What follows is violence, both physical and emotional. But the other extreme is equally demeaning. In the name of security, we deny women their natural choices and freedom. Ideally, we should be allowing greater intermixing of both sexes.
But regressive beliefs at one level and questions of safety at another encourage us towards greater segregation. This gender-based segregation starts at the school level itself and continues. This goes to ridiculous extents like every instance of boys and girls coming together being seen as sinful. Within accepted societal norms, allowing greater intermixing of boys and girls will actually help develop a healthy attitude of friendship and mutual respect.
It is time we turned our attention towards this question of dignity and freedom. Laws for women's protection are important, but not enough. We also need to revisit our customs like marriage, family and divorce. What should be the marriageable age, what should be the procedure and what if the marriage doesn't work - all these aspects need a fresh look through the prism of dignity and freedom, not just through an abstract idea of "family honor".
Nobody wants families to collapse or promiscuity to pervade. We have seen the ill-effects of the collapsing family system in Western societies. But smugness shouldn't be our way. Just because the Western models are flawed doesn't automatically mean ours are perfect.
A vibrant society should have the courage for continuous reform. Unchanging eternal values, and ever-changing social order is what Indian wisdom stands for. Remember Tennyson: "The old order changed yielding place to new; And God fulfils himself in many ways; Lest one good custom should corrupt the world."