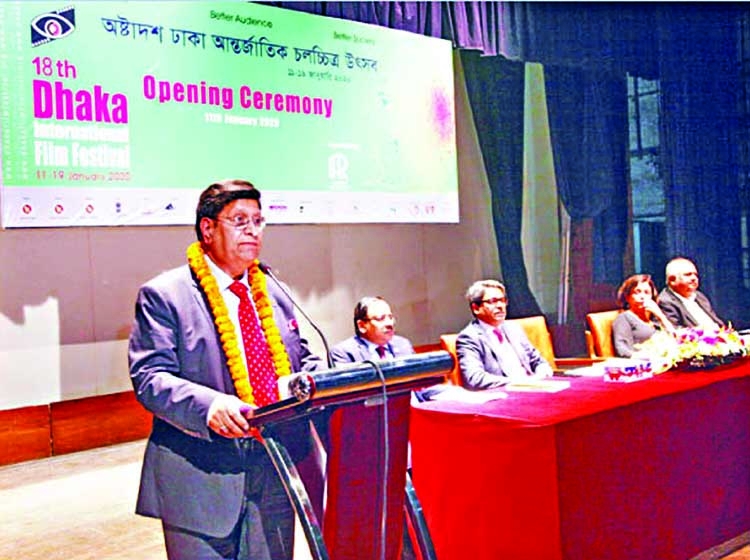 Foreign Minister Dr AK Abdul Momen (left) delivers speech at the inaugural ceremony. -Collected
18th edition of the 'Dhaka International Film Festival' (DIFF) has begun in the capital on Saturday with the motto 'Better Film, Better Audience and Better Society'.
The inaugural ceremony of the nine-day festival was held on Saturday followed by screening of a romantic drama film 'Window to the Sea' (Una ventana al mar), directed by Miguel Ángel Jiménez, at the main auditorium of Bangladesh National Museum in Shahbag of the capital.
Foreign Minister Dr AK Abdul Momen attended the inaugural ceremony as chief guest, while Polish filmmaker Joanna Kos-Krauze was present as special guest. Presided over by State Minister for Foreign Affairs Md Shahriar Alam, festival director Ahmed Muztaba Jamal delivered welcome speech at the ceremony.
The event was also attended by noted cultural personality Syed Hasan Imam, M Hamid, filmmaker Mostafa Sarwar Farooki and actor Ferdous, among others.
Foreign Minister said in his speech, "Bangladeshi filmmakers have made many internationally-acclaimed films. Many of these films are based on the glorious Liberation War of Bangladesh. I hope this international film festival will provide the local filmmakers an excellent opportunity and platform to showcase quality films to the audience."
Festival director Ahmed Muztaba Jamal said, "Promoting healthy cine culture in Bangladesh and celebrating the global mainstream of film, Rainbow Film Society has been organizing the festival since 1977. We tried to include all the sections of films in this festival."
"In this year's festival, we have included a film section for children, where they can enjoy films with their guardian. We are also arranging film screening for street children," he added.Filmmaker Joanna Kos-Krauze said, "I would like to invite all the filmmakers to involve themselves in this film festival; especially, I invite the women filmmakers."
Filmmaker Mostafa Sarwar Farooki said, "We don't have enough financial support to arrange an international film festival. Instead of having this limitation, an international film festival like this is being arranged every year in our country. I think this is high time for the sponsors to extend their financial support to us."
Like previous years, Rainbow Film Society is also arranging a two-day 'Sixth Dhaka International Conference on Women in Cinema 2020' from today at Dhaka Club, where woman filmmakers, actors and personalities from all over the world will take part.
Moreover, a daylong program titled 'West Meets East' will be held at DIFF on January 14.The film screenings during the festival are being held at the Alliance Francaise de Dhaka, Bangladesh Shilpakala Academy, National Museum Auditorium, Central Public Library Auditorium, Madhumita Cinema Hall and Star Cineplex.
The films are being screened in different categories-Asian Competition, Retrospective, Bangladesh Panorama, Cinema of the World, Children's Film, Women Filmmakers, Short and Independent Films and Spiritual Films.