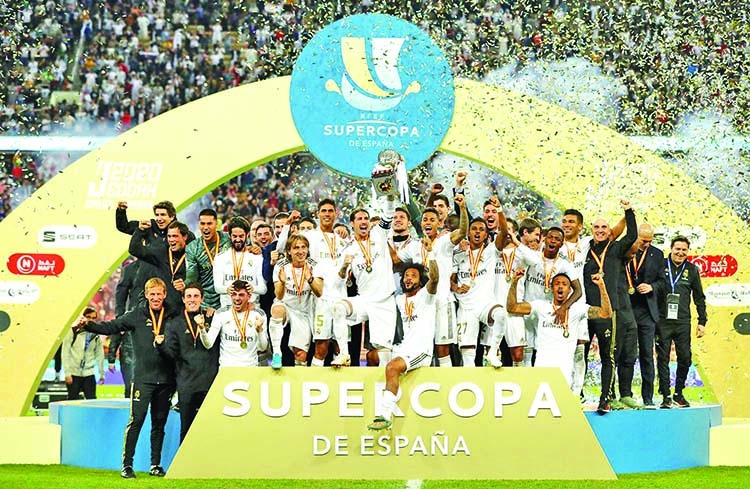 Ramos hoisted the Super Cup into the Jeddah sky as Real lifted the trophy for the 11th time. It was a 10th trophy for Real under coach Zidane, their first since the Frenchman returned to the role last March after resigning in 2018.
"We have the experience you need in the dramatic moments," said Ramos, who also praised Valverde for his crucial foul on Morata, adding: "Fede is a fantastic footballer and we would all have done the same thing in his position."Real midfielder Isco added: "The final came down to the boots of Valverde, he was very intelligent and sacrificed himself for the team."
The shootout victory also preserved Zidane's flawless record in finals, with the Frenchman winning all nine showpieces he has reached with Real as coach."Zidane's results speak for themselves. I'm a defender of 'Zizou', he deserves the respect of the dressing room and the Real fans," added Ramos.
Oblak and Courtois were the top performers in a cagey 90 minutes which forced extra time for the fifth consecutive final between the city rivals since 2013.
Courtois made an outstanding save to deny Morata late in regulation time after a sumptuous pass from Trippier while Slovenian international Oblak made a superb double save in the extra period to thwart Luka Modric and then Mariano Diaz.
The Super Cup was the traditional season curtain-raiser between the league and Cup winners before the competition was expanded to four teams by the national federation last November and moved to Saudi Arabia in a three-year deal worth a reported 120 million euros ($133 million).
---Reuters, Jeddah