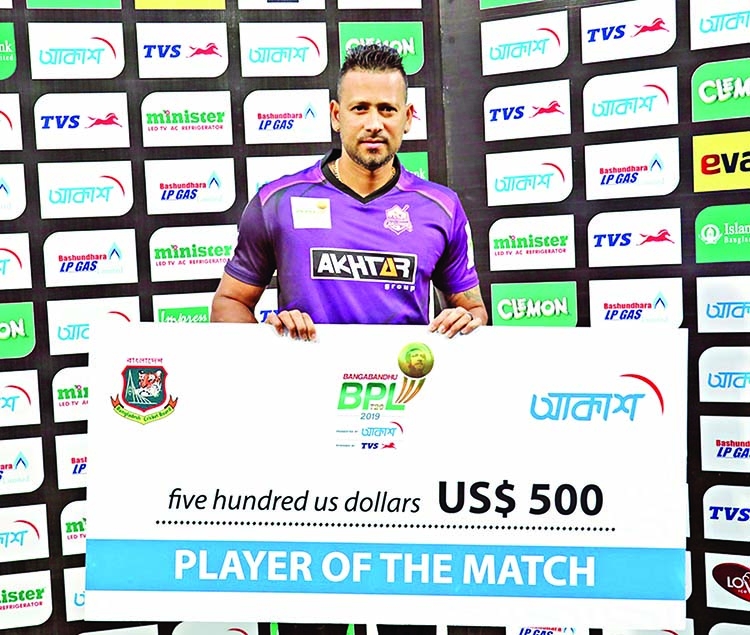 Chattogram Challengers all-rounder Rayad Emrit poses with player of the match award after the Bangabandhu Bangladesh Premier League (BBPL) first eliminator match against Dhaka Platoon at the Sher-e-Bangla National Cricket Stadium in Mirpur on Monday. -BC
Skipper Mahmudullah Riyad calmly belted a match-winning knock while Rayad Emrit bowled four outstanding overs to catapult Chattogram Challengers to comprehensive seven-wicket victory over Dhaka Platoon in the Bangabandhu Bangladesh Premier League (BBPL) first eliminator on Monday.Mahmudullah's blazing knock not only knocked Dhaka out of the BPL but also moved one step from the final with a comfortable victory.
And that is the end of the journey for Dhaka Platoon in this special edition of BPL. Just like that. A promising side through the league stages, but relegated to playing the Eliminator match. Chattogram will now take on the losers of the Qualifier 1 for their maiden entry into the summit clash of the tournament.
Chattogram finally broke the playoffs duck on Monday at the Sher-e-Bangla National Cricket Stadium in Mirpur in BPL Eliminator as they secured win for the second time in BPL knockout stage history. Chattogram have previously played three playoffs matches in their previous six seasons and only reached final in 2013 edition.
Chattogram, with their erstwhile surnames of Vikings and Kings, made it to the playoffs in 2013, 2016 and 2018 season. They lost in their last two eliminators. On Monday, on an unpredictable Mirpur track, Rayad Emrit and Mahmudullah stood as the difference made the difference for Chattogram in their dominating win to reach Qualifier 2.
Chasing the target of 145 runs, T20 boss Chris Gayle laid the strong foundation with 42-run opening wicket stand with Ziaur Rahman before skipper Mahmudullah carved out a scintillating 14-ball 34 to take Chattogram to the edge of their playoff win.
Chattogram were actually off to a solid start as promoted Ziaur failed justified his batting promotion with a breezy 12-ball 25. Ziaur and Gayle's sound start gave the mental strength among the rest of the Chattogram batsmen.
Ziaur hit three fours and two sixes in his little but vital cameo. After his exit, Gayle and Imrul further kept Dhaka bowlers at bay as the duo made 49-run stand for the second wicket. The partnership was broken when Kayes become Shadab Khan's one of two victims. Kayes scored 32 runs from 22 balls.
Dashing Gayle (38) was dismissed by Shadab a little later but skipper Mahmudullah ensured there was no late drama. He stroked four sixes in his match-winning knock.    Earlier, the player of the match Rayad Emrit had starred with the ball, taking three wickets for 23 as Dhaka were restricted to 144 for eight off their 20 overs.
If it was not for Shadab Khan's late onslaught of 41-ball 64 and Thisara Perera's 13-ball 25, Dhaka could have been bowled out under a score of 90.   Shadab and Perera made a valuable 44-run stand for the eighth wicket after Emrit along with Rubel and Nasum Ahmed grabbed wickets at key points to cripple the Dhaka' innings.
Dhaka had made a dreadful start after Mahmudullah continued his succession with coin. Rubel Hossain's new-ball swing caused some issues and opener Tamim Iqbal was deceived for 3.
But seven wickets for just 60 runs changed all that, as the trio Emrit, Rubel and Nasul kept Dhaka under pressure.  Dhaka were in a desperate need of some quick runs and they got that from Shadab and Perera. The two kept hitting boundaries and helped Dhaka collect 67 runs in the final five overs.
Shadab and Perera counter-attacked, feasting on Ziaur and Rubel's bowling in particular as they were able to take 23 runs in the final over. Shadab batted as if immune to the context. He struck five fours and three sixes and reached his maiden fifty of the tournament.
SCORES IN BRIEF
Dhaka Platoon : 144 for 8 in 20 overs (Shadab 64 not out, Mominul 31, Thisara 25; Shadab 2-32, Mahedi 1-20)
Chattogram Challangers : 147 for 3 in 17.4 overs (Gayle 39, Mahmudullah 34 not out, Imrul 32; Emrit 3-23, Nasum 2-11, Rubel 2-33)
Result: Chattogram Challengers won by 7 wickets.