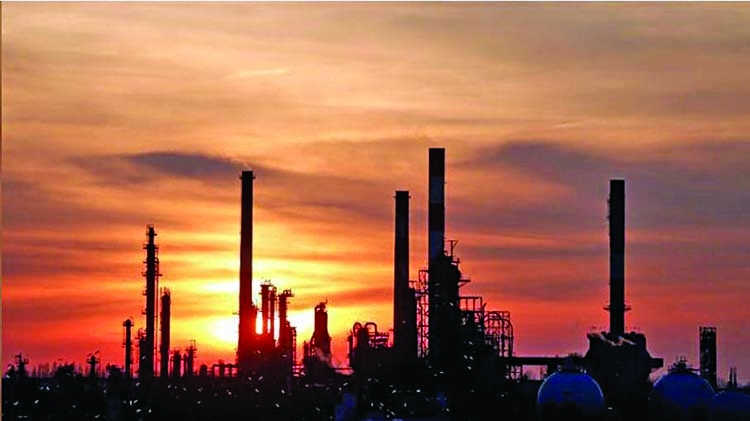 Grandpuits oil refinery southeast of Paris, France, February 29, 2016. -Reuters
Oil prices rose slightly on Monday as investors shift their focus away from easing Mideast tensions to this week's scheduled signing of an initial US-China trade deal which could boost economic growth and demand.Brent crude LCOc1 was up 20 cents at $65.18 per barrel at 0946 GMT, while West Texas Intermediate (WTI) crude CLc1 was up 16 cents at $59.20 a barrel from the previous session.
Oil prices surged to their highest in almost four months after a US drone strike killed an Iranian commander and Iran retaliated with missiles launched against US bases in Iraq. But they slumped again as Washington and Tehran retreated from the brink of direct conflict last week.Global benchmark Brent touched $71.75 per barrel last week before ending on Friday below $65.
"The price fall came as market players concluded that despite the significant rise in tension between the US and Iran, oil production is unlikely to be affected," said oil broker PVM's Tamas Varga. "Nerves have been greatly calmed and consequently oil prices finished the week well off the highs ... Violent rallies are not expected to last unless physical production is negatively impacted".
Backwardation in Brent LCoC1-LCOc2, a market structure where prices for near-term contracts are higher than those for later contracts, is currently at 73 cents per barrel, from 84 cent a week earlier, whereas the WTI backwardation CLc1-CLc2 is at 5 cents a barrel from 23 cents last week.Backwardation tends to reflect tightening supplies, and the narrowing of the values indicate that worries over supply disruption are receding.
"The fundamentals for WTI remain weak for the coming months and stocks are expected to build at Cushing," said Virendra Chauhan, an oil analyst at Energy Aspects in Singapore."For Brent, which is a broader indicator of the global crude market, it is a combination of supply and demand," he added.
A US-China trade deal is due to be signed in Washington on Wednesday.The Trump administration has invited at least 200 people to a ceremony for the signing of the deal, but the two nations have not yet finalized the details of what will be signed, White House officials said on Friday.
---Reuters, London