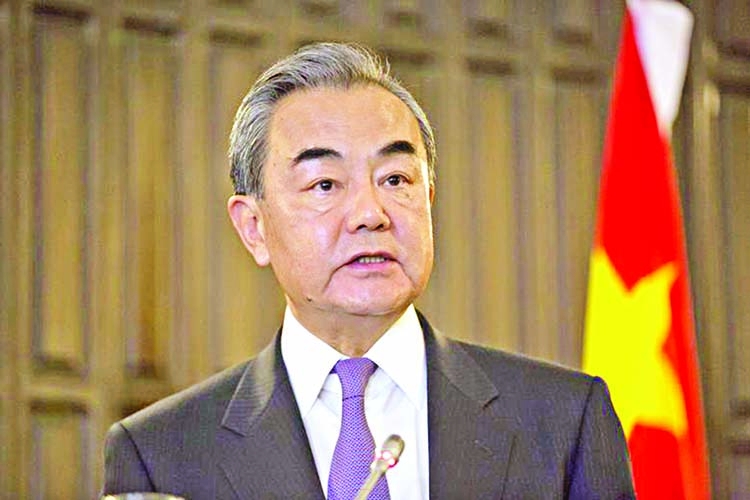 Chinese Foreign Minister Wang Yi speaks during a press conference in Harare, Zimbabwe, on Sunday. -EPE
Separatists will "leave a stink for 10,000 years", the Chinese government's top diplomat said on Monday, in Beijing's most strongly worded reaction yet to Taiwan President Tsai Ing-wen's re-election on the back of a message of standing up to Beijing. Speaking in Africa, Chinese State Councilor Wang
Yi said the "one China" principle that recognizes Taiwan as being part of China had long since become the common consensus of the international community.
"This consensus won't alter a bit because of a local election on Taiwan, and will not be shaken because of the wrong words and actions of certain Western politicians," Wang added, in an apparent reference to US Secretary of State Mike Pompeo.
In congratulating Tsai, Pompeo had praised her for seeking stability with China "in the face of unrelenting pressure". Tsai was returned to office on Saturday by a landslide, in an election dominated by China's growing efforts to get the island it claims as its own to accept Beijing's rule.
Tsai said upon claiming victory that Taiwan would not give in to threats and intimidation from China and that only Taiwan's people had the right to decide their own future. Wang, in comments carried by China's Foreign Ministry, said"reunification across the Taiwan Strait is a historical inevitability".
"Those who split the country will be doomed to leave a stink for 10,000 years," said Mr Wang, one of whose previous roles was head of China's Taiwan Affairs Office, using an expression that means to go down in history as a byword for infamy.
China passed an anti-secession law in 2005 which authorises the use of force against Taiwan if China judges it to have seceded. Taiwan says it is already an independent country called the Republic of China, its official name.
China has been particularly angry by increased US support for Taiwan. Washington has no formal ties with Taipei, but is bound by law to provide Taiwan with the means to defend itself.Meeting Ms Tsai in Taipei on Sunday, the de facto US ambassador in Taiwan, Brent Christensen, commended voters for taking part in "this sacred democratic process".
"This election serves as a reminder that the United States and Taiwan are not just partners; we are members of the same community of democracies, bonded by our shared values," he said, in comments released by the American Institute in Taiwan.
---Reuters, Beijing