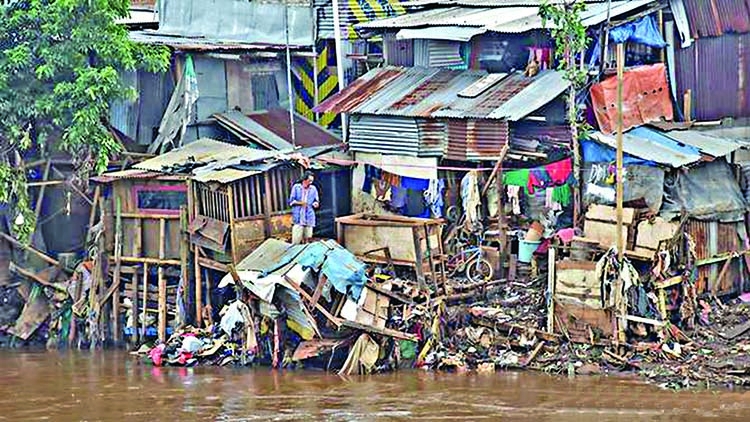 A man inspecting damages to his home in the flood-prone area of Kampung Melayu, East Jakarta. The area was one of the worst affected during the Jan 1 floods. Photo: Collected
When heavy rain began to pound Jakarta on New Year's Eve, Mr Andri Purba immediately told his staff at his doughnut factory to move their equipment to higher shelves.
The April floods, which caused his factory in East Jakarta to be inundated in knee-deep water last year, were still fresh on his minds. The last thing Mr Purba wanted was for the same thing to happen when everyone was off for the New Year holiday, reports CNA.
But what eventually happened was beyond his prediction. More than 12 hours of massive downpour caused the adjacent Ciliwung River to overflow, drowning the factory and some 200 houses and buildings nearby in waters as high as 2m. "The government never gave any warning," the 44-year-old businessman told CNA. "I was never informed that a flood would come. Neither were my neighbors."
Mr Purba, who claimed he suffered from property and equipment damages as well as several days of lost productivity, is one of 243 flood victims from Jakarta who launched a class action lawsuit against Jakarta Governor Anies Baswedan.
The lawsuit was filed at the Central Jakarta District Court on Monday and the plaintiffs were represented by a group of lawyers under the name of "2020 Jakarta Flood Victims Advocacy Team".
The plaintiffs, which come from all walks of life, argued that the government had failed to prevent loss of lives and property damages and was slow to rescue trapped residents.
They are seeking 42.3 billion rupiah (US$3.08 million) in compensation from the Jakarta government. The floods, which affected 15 per cent of Jakarta's 661 sq km area, was dubbed the worst in over a decade.
According to the Indonesian Disaster Mitigation Agency, 67 people have died since New Year's Day in Greater Jakarta and neighbouring Banten and West Java provinces when Jakarta and its surrounding suburbs were submerged in waters up to 3m deep.
One of the lawyers representing the plaintiffs, Mr Alvon Kurnia Palma told CNA that the team's clients have evidence that the city government had been negligent in flood prevention and mitigation efforts."The government was late in warning people that the flood is coming. Then there is the issue of slow response in rescuing or evacuating victims," he explained.
"Flood occurs every year (in Jakarta). The government should have learned from earlier experience and taken steps so that similar disaster don't happen again, or at least to minimise damages."Mr Palma claimed that dozens of water pumps were not maintained properly, which subsequently broke down or underperformed when the flood occurred.
The lawyer also argued that city officials could have predicted that a devastating flood was coming by measuring the water level of flood control dams along Jakarta's waterways."There were even satellite images which they can use. Why was there no warning? People could have made preparations," he said.
"We need to take legal actions (against the government) so policy makers would be more compelled to prevent this disaster in the future," the lawyer said.
On Monday afternoon, five plaintiffs and at least six lawyers were present at the court to file the class action suit. One of the flood victims, Mdm Melly Sabe said this was the first time in 25 years that her house in Gading Permai, North Jakarta, was flooded.
"No one warned us that flood would occur. No one even shut down the power. Thank goodness no one was electrocuted," the 55-year-old said.
Mdm Sabe claimed that her cars, electrical items and furniture were damaged in the floods. Materials for her clothing business, which she operates out of her home,  were also spoilt. According to the Indonesian law, more people could join the class action lawsuit as long as the court has not made its final decision.
However, Mr Palma said his team of lawyers is no longer accepting new plaintiffs and is limiting the scope of the case to floods occurred in the capital. His small team could not afford to represent clients elsewhere, he added.Elsewhere, several public defender's offices were doing the same for flood victims.

The Jakarta Legal Aid Institute (LBH) is accepting potential plaintiffs from both Jakarta and its surrounding suburbs and cities since last Monday. A coalition of lawyers in Bekasi, West Java, has also called for flood victims to come forward and join a class action.
LBH Jakarta's advocacy director, Mr Nelson Simamora said unlike Mr Palma's class action suit, potential plaintiffs represented by the office would not only be suing the Jakarta governor.
"We will not limit the defendants. We could sue the Minister for Public Works, city governments, governors and government agencies," he told CNA.The public defender argued that multiple government agencies should shoulder the blame for the New Year's Day flood.
"Government institutions don't seem to be working together or on the same page on how to solve Jakarta's flood problems," he said. "The government said they have no control over the massive downpour, but they can prevent losses of lives had they responded quicker."Several people had already signed up for the institute's class action lawsuit, Mr Simamora said.
In response to the class action, the city said it is ready to face the lawsuit and prove its innocence in court."It is their (the plaintiffs') rights if they want to sue. We cannot stop or dissuade people if they want to file a lawsuit," Jakarta legal affairs bureau chief Mdm Yayan Yuhanah told CNA.
Mdm Yuhanah said her office has prepared its own team of lawyers to handle the lawsuit, adding that the court had in 2007 ruled in favour of the government when several people sued the city following a similarly devastating flood.The Jakarta Water Management Agency has also denied that the government was negligent and slow.
"We did everything we could to mitigate the flood, but the rainfall was out of the ordinary," agency secretary Mr Dudi Gardesi Asikin said on Jan 4, according to local media. The agency added last Thursday that 76 flood control pumps had failed to operate because they were damaged by the floods.
"Water overflowed and flooded our pump stations. We couldn't operate them," Mr Asikin said, adding that the city has 478 pumps in total. "The water was just extraordinary."Mr Baswedan, the governor, also claimed that the city has done all that it could to mitigate the floods, adding that the situation in Jakarta was not as severe as that in surrounding suburbs.
"In other areas bridges were destroyed. In Jakarta, thankfully no building was destroyed, no house was buried in landslides, no road was damaged," Mr Baswedan was quoted as saying by Kompas.
The governor said he was unfazed by the criticisms as well as the ongoing lawsuit. "We will continue to work to make sure people are served and protected. That is our focus," he said.