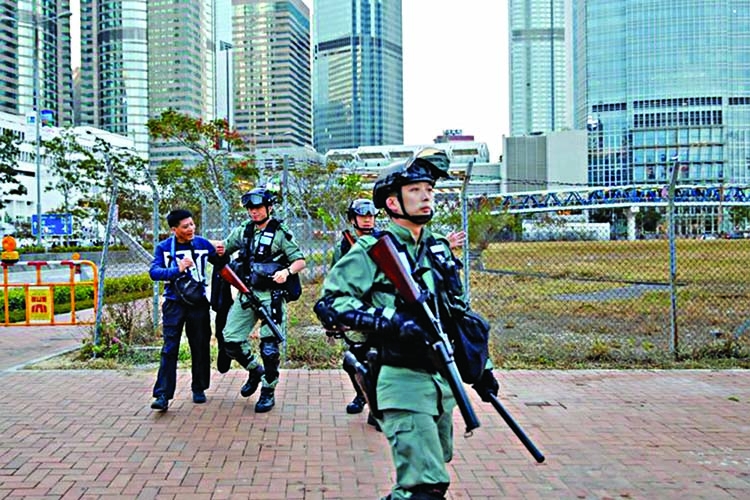 A man is let go after being interrogated by a police officer after a protest at Edinburgh Place in Hong Kong on Sunday. -Reuters
An investigation by Hong Kong's police watchdog into the conduct of the city's officers throughout recent unrest has revealed "many shortcomings," the Hong Kong Economic Journal reported.
The 300-page report from the Independent Police Complaints Council (IPCC) found a failure to separate peaceful demonstrators from violent protesters, the newspaper reported Monday, citing unidentified people, reports Bloomberg.
The probe also determined there was a lack of communication among frontline police commanders during protests and insufficient "cease-fire" guidelines when using tear gas, the paper said.
The report, which hasn't yet been officially released, is scheduled to be discussed at a meeting of the IPCC this week. If approved, it would be submitted to Hong Kong Chief Executive Carrie Lam for possible release in the coming weeks.
An IPCC spokeswoman said on Monday the agency declined to comment. The Hong Kong Police Force didn't immediately respond to requests for comment, although the police have consistently defended their actions as a response to recurring violence from protesters, some hurling petrol bombs and attacking officers.
Lam's administration has declined to meet protester demands for an independent commission of inquiry into police conduct during the protests and has insisted that the IPCC is the agency that should deal with the matter.
However, the IPCC, which is mandated to look into public complaints against police officers, has come under criticism throughout Hong Kong's seven months of violent unrest for not being fully independent.
That critique was echoed by a government-appointed panel of overseas experts meant to advise the IPCC."We ultimately concluded that a crucial shortfall was evident in the powers, capacity and independent investigative capability of IPCC," the group said, when it announced it would withdraw from the process.
The IPCC report detailed examinations of several major protests, the Economic Journal said. Those include a million-strong rally followed by clashes on June 9, demonstrations on June 12 and the events of July 1, when protesters broke into and ransacked the Legislative Council building.
The report, however, won't feature extended sections on two prominent incidents that spurred outrage against the police: the July 21 attacks on protesters and subway passengers by mobs of men wearing white T-shirts in Yuen Long and the riot police's Aug 31 storming of a subway station in Prince Edward.