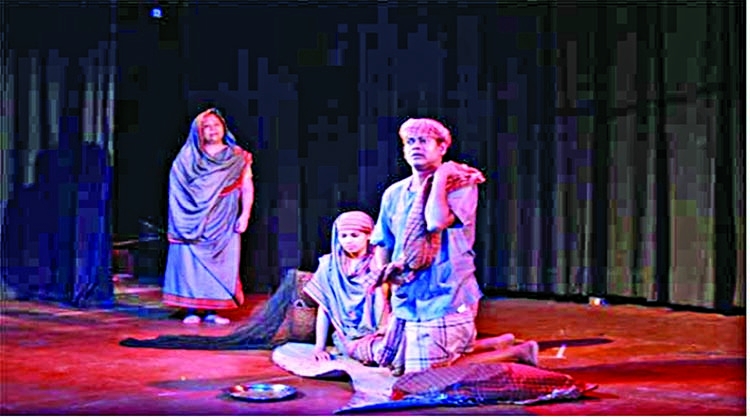 A scene of drama 'Jaal Natak' staged at Shilpakala Academy Auditorium by Bangladesh Institute of Theatre Arts ( BITA), Chattogram on Thursday.
'Jaal' natak , a reflection  of social context was  staged at Chattogram Shilpakala Academy  Auditorium  in observance of the silver jubilee celebrations of Bangladesh Institute of Theatre Arts (BITA) .
The 'Jaal Natak ' depicted the women empowerment and  women's  sustainability in the  man dominated  society .It teaches  the women to come out from the  boundary for  achieving their future goal.
BITA  produced this drama titled 'Jaal'  aimed  at joining the democratic culture by women  and  lifestyle of people, development of  cultural field  and  social activities .
The directive of the drama Jaal  was composed by a noted draftiest of India Usha  Ganguly . The sequence  of  drama begins with the lives of   fishermen of Sundarbans.
The lifestyle of Sundarbans  dwellers  and their backwardness in social  , economical  and natural  conditions  which linked with poverty, illiteracy . This drama also depicted the  matter  of  women trafficking. In fact  'Jaal ' drama is  a reflection of  man dominated social  system which continuing decades after decade.
Now  women won't want to  confine under  Jaal (net) further  and they want to get touch with the light of  literacy .Some 17 drama actors   acted in the drama. Senior drama artist  Subra Biswas  played role  in the Jaal Natak.