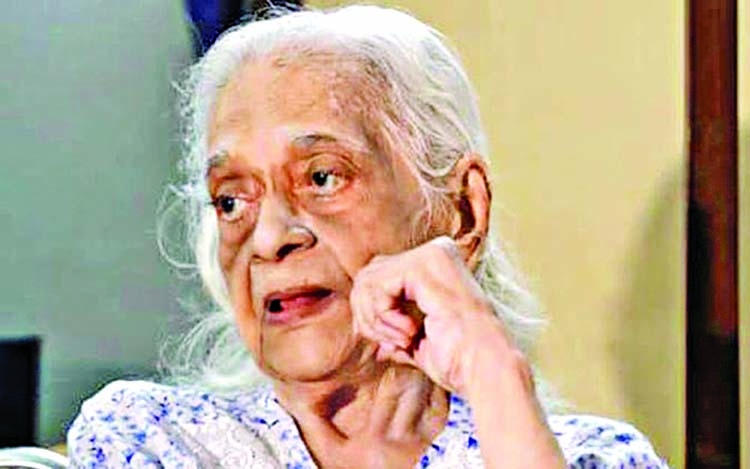 Prateeti Datta, the twin sister of legendary Bangla film-maker Ritwik Ghatak, has died at the age of 95. She passed away while undergoing treatment at Bangabandhu Sheikh Mujib Medical University (BSMMU) around 8:40am on Sunday, said Prateeti's daughter Aroma Datta, a rights activist and the Awami League MP from the seats reserved for women. She was admitted to BSMMU with pneumonia on January 7.
Prateeti's husband Sanjib Datta was the son of Shaheed Dhirend-ranath Datta, the first person to demand state recognition of Bangla language in the Pakistan Constituent Assembly. Dhirendranath and his son Dilip Datta were tortured and killed by the Pakistani military in 1971.
The mortal remains of Prateeti were taken to her Moghbazar residence around 10:00am on Monday where people paid their last respects to her.
Her body was handed over to the BSMMU Hospital authorities as a donation as per her wishes, Aroma said.Born in Old Dhaka in 1925, Prateeti left Bangladesh with her brothers - author Manish Ghatak and Ritwik Ghatak -- and niece Mahasweta Devi, during the 1947 Partition.
Prateeti later returned to Bangladesh and got married to Sanjib, who worked as a journalist at the then Pakistan Observer (later renamed Bangladesh Observer after liberation).
Her husband was also one of the coordinators of Mukti Bahini during the 1971 Liberation War that led to Bangladesh's birth as a sovereign nation.She received popular acclaim for her book 'Ritwik ke Shesh Bhalobasha' (last love for Ritwik).
---Agency