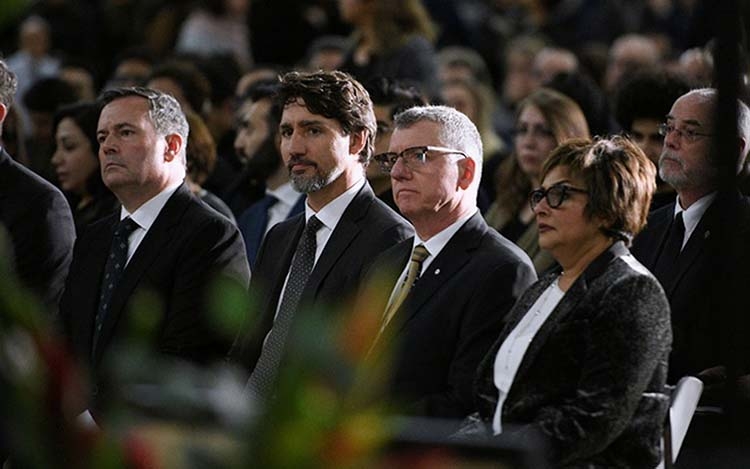 Premier of Alberta Jason Kenney, Prime Minister of Canada Justin Trudeau and David H Turpin, President of the University of Alberta, attend a memorial service at the University of Alberta for the victims of a Ukrainian passenger plane that crashed in Iran
Iran says it mistakenly shot down a Ukrainian airliner on Wednesday, killing 176 people. Fifty-seven Canadians died, most of them of Iranian descent, in one of the biggest single losses of life Canada has suffered in 40 years.
"You may feel unbearably lonely, but you are not alone. Your entire country stands with you, tonight, tomorrow, and in all the years to come," Trudeau told a standing-room crowd of 2,300 in a basketball gymnasium in Edmonton, Alberta, home to 13 of the victims. Most had direct links to the University of Alberta.
As Trudeau spoke, boxes of tissues were passed among the mourners who packed the bleachers. Black-rimmed photos of the dead stood on the stage, beside arrangements of rose petals, candles and plates of dates.
"This tragedy should have never occurred, and I want to assure you that you have my full support during this extraordinarily difficult time ... you give us purpose to pursue justice and accountability for you," said Trudeau, who has demanded Canada take part in the crash probe.
"We will not rest until there are answers." Alberta Premier Jason Kenney lamented an "epic demonstration of human folly." Kenney, a political foe of Trudeau, told the vigil he was confident the prime minister would give his all to find out what happened.
Family and friends wept and hugged, listening to tributes to their loved ones from young and old. Ghazal Pakseresht grieved the short life of her friend and Persian school classmate, 14-year-old Daria Mousavi who died in the crash with her sister Dorina, 9, and parents Pedram Mousavi and Mojgan Daneshmand.
"She never got to fall in love, get married, have kids and grow old. In life we don't realise how important someone is to us until they're no longer with us," Pakseresht said of Daria. Daniel Ghods said his girlfriend, Saba Saadat, a student of biological sciences, was a "glimpse of light" in his life, before she was killed in the crash.

"In this world we live in it's easy to become desensitised to the tragedies going on around us," Ghods said. "I ask everyone to maintain their humanity and be kind to one another."
Earlier in the day about 2,000 people packed into a Toronto university hall, voicing grief and rage. "There is no justice in this world," said Masoud Niknam, mourning his brother Farhad, a dentist and married father of two children."I don't believe in anything anymore. We will have a hole in our hearts forever and that cannot be filled with anything."
"Everybody is angry, everybody is upset. I haven't seen Iranian people like this since 1979, the revolution," said Mehrdad Ariannejad, CEO of Tirgan, a non-profit organisation that organised the Toronto memorial.The memorials follow several days of grief in Canada, including candlelight vigils in many cities.