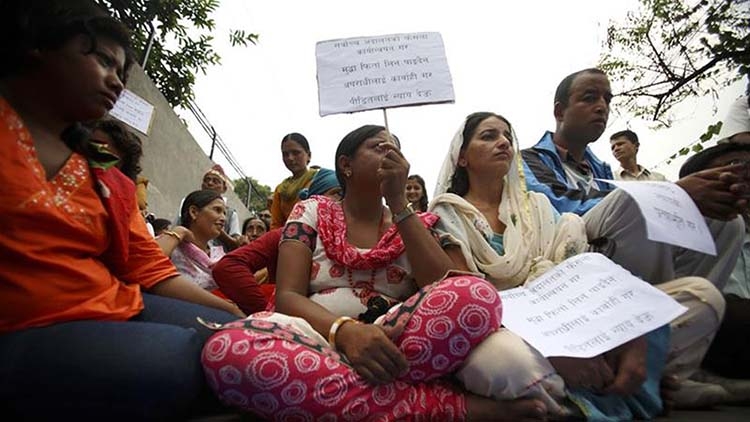 More than 16,000 people were killed and nearly 1,400 disappeared - mostly at the hands of security forces - during Nepal's civil war. -Reuters
Nepal's transitional justice process, which has been stalled for years, looks all set to take a step forward, as authorities plan to begin nationwide consultations with victims and stakeholders.
Nepal formed two commissions in 2015 to address transitional justice, but activists say it has been beset with delays and political interference.
The two bodies have been lying defunct since last year but this week, a recommendation committee set up by the government is ready to recommend officials to be appointed to the two commissions - the Truth and Reconciliation Commi-ssion (TRC) and the Commission of Investigation on Enforced Disappeared Persons (CIEDP).
The government on Monday began nationwide consultations with victims regarding the Transitional Justice Act (TJA), but victims of Nepal's decade-long civil war (1996-2006) claim that government processes are "cursory" and do not take victims' voices into consideration.
The government move to amend the TJA in 2014 to give amnesty to people accused of grave human rights violations has faced criticism from victims and rights groups, who demand an amendment to the TJA to match international standards.
The Supreme Court declared the amendments unconstitutional in 2015. More than 16,000 people were killed and about 1,400 disappeared during the civil war fought between the Maoists and the Nepalese army. The war ended in 2006 when the Maoists and the government signed the Comprehensive Peace Agreement.
More than 13 years later, little progress has been made into the cases, said the International Commission of Jurists (ICJ), Amnesty International, Human Rights Watch (HRW) and TRIAL International in December.
The former Maoist party has since merged with the moderate Communist Party of Nepal (CPN-UML) to form the Nepal Communist Party, which currently rules the country of nearly 30 million. "
Government officials, victims, and other stakeholders will discuss amendment to the Transitional Justice Act. We will incorporate their feedbacks and start drafting the bill amendment," Dhanraj Gyawali, a spokesman of the Ministry of Law, Justice and Parliamentary Affairs (MoLJP), told Al Jazeera.
"We expect about 80 participants in each [of the seven] province." The victims' group Conflict Victims' Common Platform (CVCP) has objected to what they say is a cursory method of consultation. "We had asked the government to have consultation down to the village level, and not just at the provincial level.
We wanted the consultation to incorporate as many victims' voices as possible, and the process to spread over a few months. We are unhappy with the modality of the consultation itself," says Bhagiram Chaudhary, the president of CVCP. "
Our participation in the consultation will be critical." On Monday morning, before the consultation, CVCP protested at Maitighar Mandala in the capital Kathmandu, claiming the consultation was too short, was just for show, and was not transparent. They claimed it was not intended to benefit the victims.Victims' groups had also asked that the Act be amended before officials are appointed to the two commissions.
The two commissions together have received about 65,000 complaints, but were unable to investigate all the claims and report their finding within their initial term of two years. Their terms were extended several times, before expiring early last year. Now the government seems ready to jumpstart the transitional justice process.
"We have received about 60 applications for positions in the two commissions, and we have studied them. We are ready to make our recommendations by the end of the week," said Sharmila Karki, a spokesperson of the committee tasked with recommending officials to the two commissions.

"We do not know when the government will appoint them or how the process will go forward after that." Ram Bhandari, the president of National Alliance of Conflict Victims, says the government should not rush with the appointment to the transitional bodies without amending the TJA as it grants amnesty to perpetrators.
"Of course, we want the two commissions to be reformed so that they can take the process of transitional justice forward. But if they are reformed now, it will be on the basis of existing laws, and we do not want that," said Bhandari, who split from CVCP in 2018."The recommendation commission has not held consultation with victims, and it seems to be a victim of political interventions."
---Reuters, Nepal