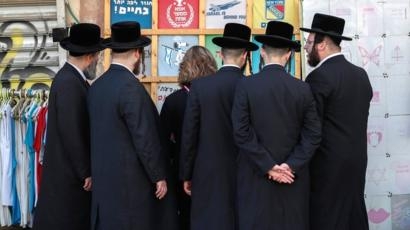 A rabbi has been arrested in Jerusalem on suspicion of holding dozens of women and children in conditions of slavery, Israeli police said Monday.
The 60-year-old suspect was detained on suspicion of running a “closed community” where women and children “worked under conditions of slavery“, police said in a statement.
A two-month investigation was launched after officers received reports that the religious leader had for years committed “severe offences” against those living at the residence, police said.
Some 50 women and a number of children under 5 were found when police raided the site, where victims were thought to have been isolated from the outside world.
A police video of the raid, in a central ultra-Orthodox neighbourhood of Jerusalem, showed cramped living quarters with bunk beds as well as piles of cash.
“The suspect also punished the women in different ways and stole money from them,” police said.
Eight women accused of aiding the rabbi were also detained and are being held on suspicion of slavery.
The arrests come after ultra-Orthodox women launched a campaign in November urging those in their community to speak up about domestic abuse.
Ultra-Orthodox Jews make up around 10 per cent of Israel’s population and live in close-knit communities often closed off from wider society. - AFP