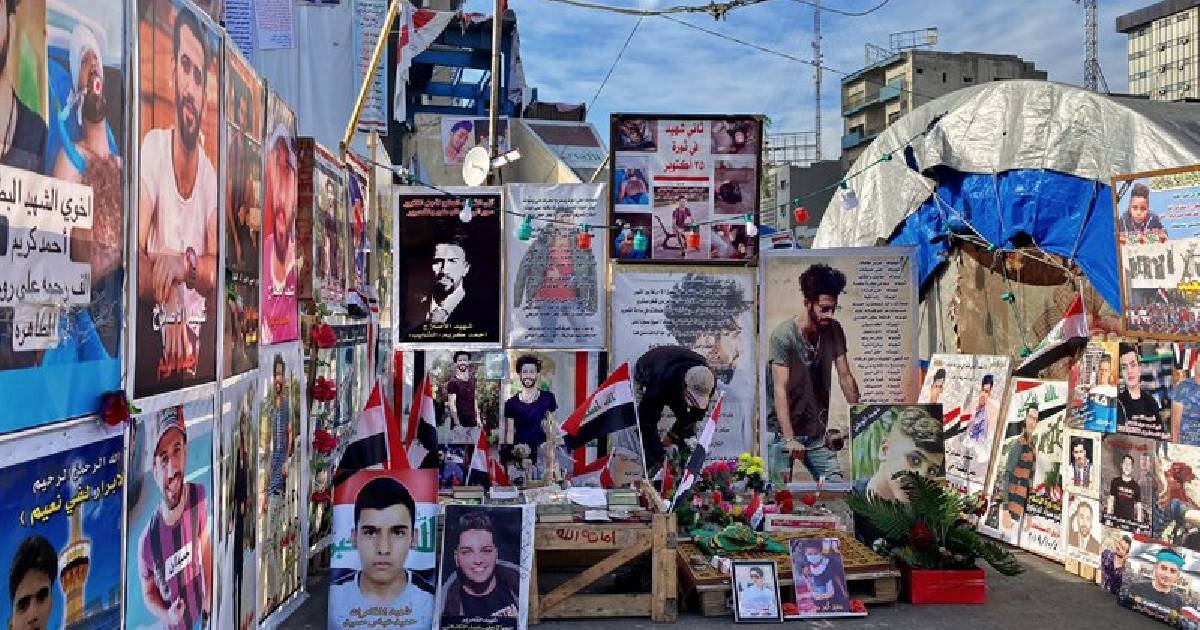 Young Iraqis who drove mass protests demanding sweeping political reforms are worried that the conflict between the U.S. and Iran, which is playing out in part on Iraqi soil, is killing their momentum.
Even before the U.S. drone attack that killed Iranian Gen. Qassem Soleimani, the 4-month-old protests against government corruption, poor services and rising Iranian influence in state affairs were beset by internal divisions. A violent security crackdown heightened tensions, leading to hundreds of deaths and thousands of injuries as well as targeted killings of sympathizers.
And in the stormy aftermath of the U.S. drone strike that also killed top Iraqi militia commander Abu Mahdi al-Muhandis, avoiding another war in Iraq became a top priority for state officials as they scrambled to contain hostilities between Washington and Tehran.
"We are afraid that the uprising is being forgotten and (officials) are focusing on things we don't want, not our main goals," said Noor, an activist in Baghdad's Tahrir Square who asked to be identified only by her first name, fearing reprisal, like all other protesters interviewed for this story. "On the other hand, we are trying to be calm and keep people on the street to make the point that we are not with the Americans or the Iranians. We are with Iraq."
There are hopeful signs as Iran and the U.S. appeared to back down — at least in the short term — after Tehran retaliated for Soleimani's killing by firing missiles at two Iraqi bases housing American troops. No one was seriously injured and Iran was unexpectedly forced to shift gears to manage the fallout from its accidental downing of a Ukrainian airliner filled with Iranians.
Nevertheless, the issue of U.S. troop withdrawal in response to the attack that killed Soleimani minutes after he landed at Baghdad airport has monopolized Iraqi politics, with caretaker Prime Minister Adel Abdul-Mahdi openly calling for their ouster.
"Everyone is busy with America and Iran, but we are still facing attacks on the street," said Zaid, a protester in Baghdad. "Now we've become an easy goal for the militias; they can harm us because no one is focusing on them."
The rejection of Iranian influence over Iraqi state affairs was a core component of the protest movement and demonstrators fear that as tensions between Tehran and Washington ease, Iranian-backed militias will turn on them for vengeance.
The protests began Oct. 1, when thousands took to the streets in Baghdad and in the country's predominantly Shiite south. Since then, about 500 people have been killed, most of them shot by security forces who also used tear gas to disperse crowds.
While Friday protests brought out thousands countrywide, the turnout was lower than expected. Adding to their worries, two local journalists known for their coverage of the anti-government protests were found shot dead in a car parked near a Basra police station. And more people were wounded in clashes Saturday between protesters and security forces in Karbala, in southern Iraq, when police fired into the crowd.
"Protesters are certainly more afraid now than they were a few weeks ago but at the same time they want to maintain their ground," said Ruba Ali Hassan, a researcher at York University in Toronto. "They've had such great momentum over the past three plus months and there's great fears this momentum might die down. People are trying to show great support and make sure that the protesters can still move forward but they're on shaky ground unfortunately."
A growing concern among protesters is their belief that Iran-backed militias are seizing on some demonstrators' refusal to grieve over Soleimani as an excuse to attack them. In turn, the attacks fuel the differences of opinion over Soleimani, deepening the rifts between the demonstrators and distracting them from their original purpose.
In the southern city of Nasiriyah, for instance, protesters refused to let a symbolic funeral procession for the Iranian general enter the square where they were camped. Violence broke out and at least one protester was killed and three wounded when an Iran-backed militia fired on crowds. Demonstrators then burned the headquarters of Popular Mobilization Forces, an umbrella organization for multiple militia groups and part of the Iraqi security forces.
"Political parties and militias have attempted to create discord within the demonstration square in the center of Nasiriyah — they took advantage of the rifts between protesters," said Ali, a protester based in the city. "We have concerns the emotions arising from his death will rob the protests of its true aims."
The events in Nasiriyah have spooked protesters in Baghdad's Tahrir Square, the epicenter of the movement, who fear similar attacks, several activists said.
Since Soleimani's death, protest organizers have been trying to refocus attention on their movement, three activists said. With that in mind, they issued a statement last week saying their goals had not changed.
At the top of their list is preventing Abdul-Mahdi, who has headed a caretaker government since his resignation in December, from being renamed prime minister, which many suspect the country's political elites would like.
"All the news is about America and Iran, and the elites are trying to make the people forget about the protests in Iraq, and our goal for change and we don't want that," said the protester, Noor. "We are trying to be calm and study what is going on around us. We are telling everyone, stay with Iraq. This is not our war.