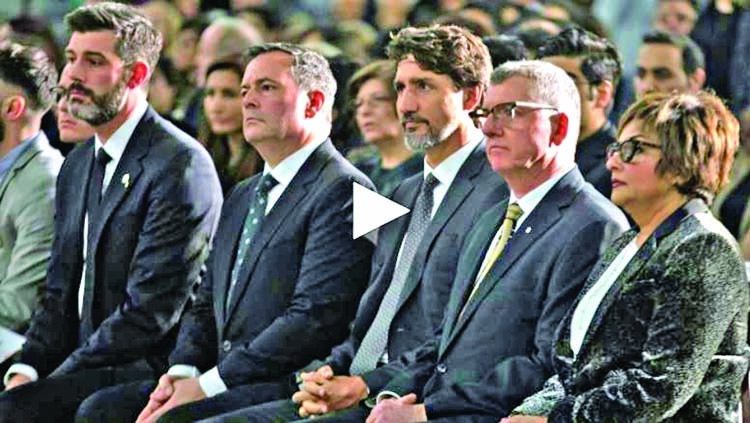 The CEO of Maple Leaf Foods spoke out Sunday against the U.S. government, days after an Iranian missile accidentally shot down a jetliner, killing all 176 people on board -- including the family of a company employee. Michael McCain said in a series of tweets that the time since Wednesday's crash has not quelled his anger over what he describes as a "needless, irresponsible series of events in Iran." "U.S. government leaders unconstrained by checks/balances, concocted an ill-conceived plan to divert focus from political woes.
The Queen will host crisis talks at an unprecedented royal summit at Sandringham, with implications not just for the future of the Duke and Duchess of Sussex, but for other members of the royal family. The Queen will be joined by Prince Charles, Prince William and Prince Harry - with Meghan, Duchess of Sussex, likely to dial in from Canada - and will seek to make key decisions on how the couple fulfil their desire to "step back" from frontline royal duties and become self-funding. The crunch meeting at the Queen's Norfolk estate comes after five days of turmoil amid claims that the Sussexes feel "driven out" of the royal family. As the crisis continued, William expressed his sorrow over the breaking of the brotherly bond.
Japanese Prime Minister Shinzo Abe was in Saudi Arabia for talks with King Salman on Sunday as part of a tour of oil-producing Gulf Arab states aimed at promoting peace amid a spike in tensions between the U.S. and Iran. Japan has a deep alliance with the United States, but it also has ties with Iran, which until 2017 supplied Japan with about 5% of its crude oil imports. Japan has sought to remain politically neutral as tensions in the Persian Gulf have escalated following President Donald Trump's decision to withdraw the U.S. from Iran's nuclear deal with world powers.
EXO's Chanyeol and Sehun have voiced their support for the Australian bushfire efforts in a video shared to their Instagram accounts. In the video, the two idols say: "Hello, this is Sehun and Chanyeol. They say that the damage caused by the Australian bushfires, which began five months ago, is still severe. I think it's still a time where more of your attention is needed.  Many other Asian celebrities have also shared their support for the bushfire effort, with artists like Jay Park, BLACKPINK's Rosé, CIX's Seunghun and VICTON's Byunchan donating money, along with many such as Stray Kids, PENTAGON's Kino, EXO's Lay, Super Junior's Yesung, actors Park So Dam and Gong Hyo Jin, and MONSTA X's I.M all sharing messages of support.