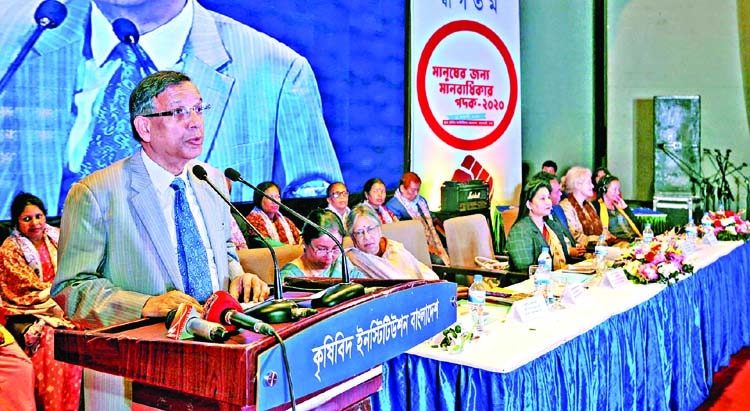 Law Minister Anisul Huq speaking at an award distribution ceremony titled "Manusher Jonno Manobadhikar Padak-2020" at Krishibid Institution Bangladesh in the capital on Tuesday. -AA
Mentioning that the government has taken many initiatives to protect human rights in Bangladesh, Law Minister Anisul Huq on Tuesday urged all, including non-governmental organizations (NGOs), to come forward to supplement its efforts in this regard.
He made the call while addressing an award distribution ceremony titled "Manusher Jonno Manobadhikar Padak-2020" at Krishibid Institution Bangladesh in the capital.Manusher Jonno Foundation (MJF) organized the event in association with UKAid, Canada and Sweden Sverige.A total of 10 human rights activists were awarded at the event for their outstanding contributions to protecting human rights in the country.
The minister said Father of the Nation Bangabandhu Sheikh Mujibur Rahman had tried to establish an exploitation-free society but he could not materialize it as he was assassinated in 1975. "Now, his daughter Prime Minister Sheikh Hasina is working to ensure human rights in all spheres, he said.
He also said there are freedom of press and expression, and human rights in Bangladesh. "To fully establish human rights, the government has set up the National Human Rights Commission. It has also signed treaties with all international human rights organizations, he added.The government does not want to keep a single case of repression pending for long, Anisul said, urging all to come forward to ensure human rights in the country.
MJF Executive Director Shaheen Anam said Bangladesh made progress in many sectors but climate change is now a big challenge for the country.She underscored the need for working together to ensure transparency and full accountability in society to bring a qualitative change.
Human rights activist Sultana Kamal urged all to be conscious about their rights. No-one can move forward without honesty and sincerity, she added.Christine Johansson, deputy head of mission and head of cooperation of SIDA, Judith Herbertson, country director of DFID, and KM Abdus Salam, Director General of NGO Affairs Bureau, also spoke at the event with Parveen Mahmud, member of the MJF Governing B, in the chair.