Democrats huddle ahead of transfer of Trump impeachment 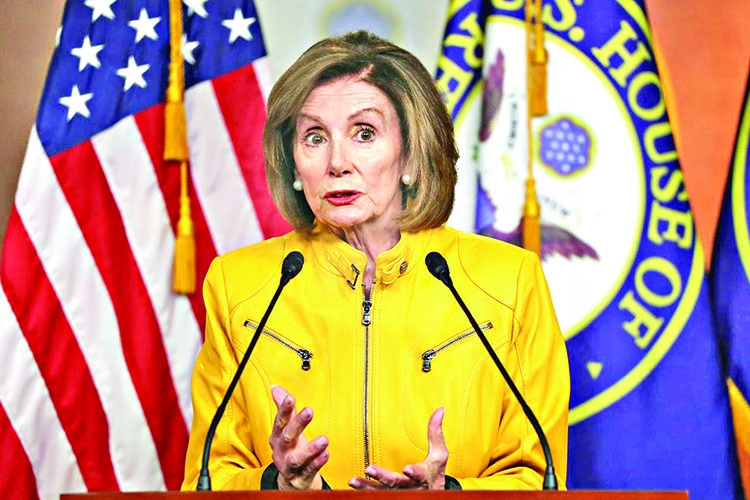 US Speaker of the House Nancy Pelosi
Democrats in the US House of Representatives on Tuesday will discuss the strategy and timing for sending articles of impeachment against President Donald Trump to the Senate as Republicans balk at a call to dismiss the charges without a trial.
House Speaker Nancy Pelosi will convene the meeting at 9 am (1400 GMT) for a check-in session after saying on Sunday she planned to send the impeachment charges, which she has held since the House passed them in December, to the Senate this week.Pelosi could also unveil the names of the lawmakers who will be the managers who argue the House's case in the Senate trial.
House Majority Leader Steny Hoyer said he expected the resolution naming the managers and authorizing the transfer of the articles to the Senate to become public before the end of the week."By the end of the week, maybe before the end of the week," Hoyer told a reporter who asked when the resolution would emerge.
The House is currently scheduled to hold its last votes of the week on Thursday at 3 p.m., before lawmakers leave Washington for a one-week break that includes the Martin Luther King Jr. Day holiday on Monday.Senate Majority Leader Mitch McConnell has vowed to help acquit Trump, a fellow Republican.
But despite his preference for a quick trial, and the president's suggestion that a full trial would give credibility to Democrats that he feels is undeserved, several Republicans signaled on Monday they would not support any effort to dismiss the charges outright.McConnell has not committed to allowing any witnesses or new documents in the proceedings.
The impeachment charges stem from Trump's request that Ukraine investigate former Vice President Joe Biden, a leading contender for the Democratic nomination to face Trump in the Nov. 3 presidential election. Trump denies wrongdoing and has dismissed the impeachment process as a sham.
The Republican-controlled Senate is expected to vote to acquit Trump. The conviction and removal of Trump would require a two-thirds majority of those present in the 100-member chamber.
---Reuters, Washington