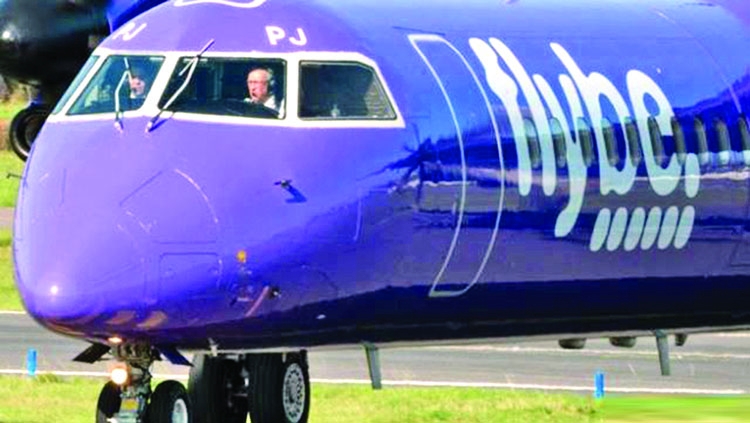 Flybe says air passenger duty unfairly burdens its domestic customers
Prime Minister Boris Johnson has told the BBC there is "no doubt" about the importance of regional airline Flybe. The carrier's network includes more than half of UK domestic flights outside London. The government is to consider cutting air passenger duty on domestic flights as part of a plan to save the airline from collapse. However, environmental groups said such a move would be "reckless" given the need to prevent climate change.
The prime minister told the BBC that it was "not for government" to step in and save companies that run into trouble. But he added: "We see the importance of Flybe in delivering connectivity across the whole of the United Kingdom." The airline carries about eight million passengers a year from airports including Birmingham, Manchester, Southampton, Belfast City, Cardiff and Aberdeen, to the UK and Europe.
Tim Jeans, chairman of Cornwall Airport, said Flybe was "very important not just to our airport but to regions, to nations and to island communities across the UK". "They provide lifeline services to destinations across the rest of the UK that simply are not replicated by either other airlines or convenient and affordable train services."
The UK government is considering a cut to air passenger duty (APD) to help the Exeter-based company. The change would allow Flybe to defer its tax bill, design a rescue plan, and secure more than 2,000 jobs. Improving connectivity outside of London was a key Conservative manifesto pledge and at least one of Flybe's routes, between Newquay and London, is subsidized by the government.
Sky News reported that the possible deal over air passenger duty could see Flybe defer a payment of more than £100m for three years. By applying the move to the whole industry, the government would avoid breaching EU state aid rules.

It's also thought any turnaround plan would be financed by a consortium led by Sir Richard Branson's Virgin Atlantic, which rescued the airline a year ago. Virgin Atlantic, Southend Airport-owner Stobart Group and hedge fund Cyrus Capital Partners paid £2.8m for the airline and agreed to invest £100m in the loss-making business. Flybe has refused to comment on talks over a rescue.
---BBC, UK