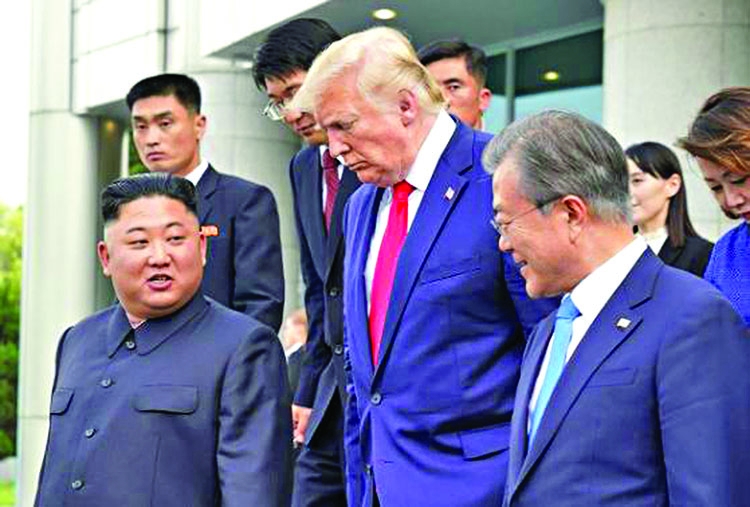 South Korea's President Moon Jae-in hailed US President Donald Trump for sending birthday wishes to North Korean leader Kim Jong Un. Here three leaders are in this file photo. -Reuters
South Korea's President Moon Jae-in hailed US President Donald Trump for sending birthday wishes to North Korean leader Kim Jong Un, describing it as "a great idea" to improve chances of restarting denuclearization talks.
"Some were concerned about a new round of provocations just in time for Chairman Kim's birthday," Moon told reporters at an annual news conference on Tuesday. "Instead, President Trump sent him birthday wishes to stress his willingness to talk. It was a great idea."
Saturday's acknowledgement from the North Korean authorities that they had received the birthday greetings would be one of the most concrete confirmations of their leader's birth date, though they did not mention the exact date.
Kim's birthday is believed to be Jan. 8, though his secretive regime has never confirmed the date. The US  government lists Kim's birth year as 1984, making him 36 years old this year.On Friday, a South Korean official said Trump had asked the South Koreans to pass on birthday greetings to North Korea.
Over the weekend, however, North Korea released a statement saying it had already directly received a "personal letter" from Trump and called South Korea "presumptuous" for trying to meddle in U.S.-North Korea relations.The statement also ridiculed Seoul for appearing not to know that the North Koreans have their own channel of communication with Washington.
Despite the prickly response, Moon repeatedly cited the birthday messages as evidence that not all is lost. "North Korea made clear that the door to dialogue is not closed by saying they will come back to talks only when their demands are accepted," Moon said of that North Korean response."
The US-N Korea talks are not active right now, but I would say both leaders - President Trump and Chairman Kim - continue to trust one another and continue with their efforts."
Later, when asked whether Trump's decision to order the killing of Iran's Qassem Soleimani could complicate efforts to get Kim to give up his nuclear weapons, Moon once again cited the birthday greetings as a good sign that underscores the U.S. president's commitment to negotiations.
Last year North Korea said that it was losing patience and warned it could take some unspecified action if the United States did not soften its negotiating stance by the new year.The deadline passed, however, with no immediate provocation from North Korea, though Kim did say the world would soon witness a new strategic weapon.
---Reuters, Seoul