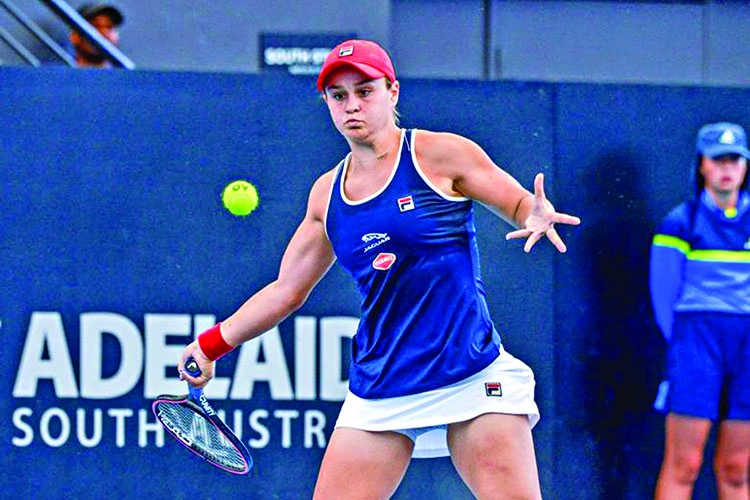 Ashleigh Barty hits a return to Anastasia Pavlyuchenkova during their women's second round singles match at the Adelaide International tennis tournament in Adelaide, on Tuesday. -AFP
World number one Ashleigh Barty survived a scare Tuesday before battling through her opening match at the Adelaide International to beat Anastasia Pavlyuchenkova in three tough sets.
The top seed, who had a bye in the first round at Memorial Drive, faced a struggle to get past her experienced Russian opponent 4-6, 6-3, 7-5 and book a place in the quarter-finals.
The Australian was joined in the last eight by second seed Simona Halep, who made her 2020 competitive debut with a 6-4, 7-5 defeat of Ajla Tomljanovic. Halep is back with Adelaide coach Darren Cahill after his family leave during 2019, and the Romanian said getting through the opening match of the season is an annual challenge.
"It was a tough match but I expected that, since I've played her twice before. I'm very happy to go through. Training cannot compare with actually playing. "I got a bit tired in the second set and I'll have to keep up my level for the next match."
Barty said she got comfortable as she scored her first season win after losing her opening match last week in Brisbane. The 23-year-old is looking for crucial court time before the Australian Open starts next Monday in Melbourne.
"I was able to play, my style and control a bit more in the third set," the Australian said. "No matter what the score is, I try and hang around for the whole match every time."I felt like I was doing the right things. I just needed to hang in there and wait for an opportunity to come and then try and grab it. "I'm pretty happy to be able to turn that one around."
---AFP, Adelaide