All eyes on 2nd eliminator 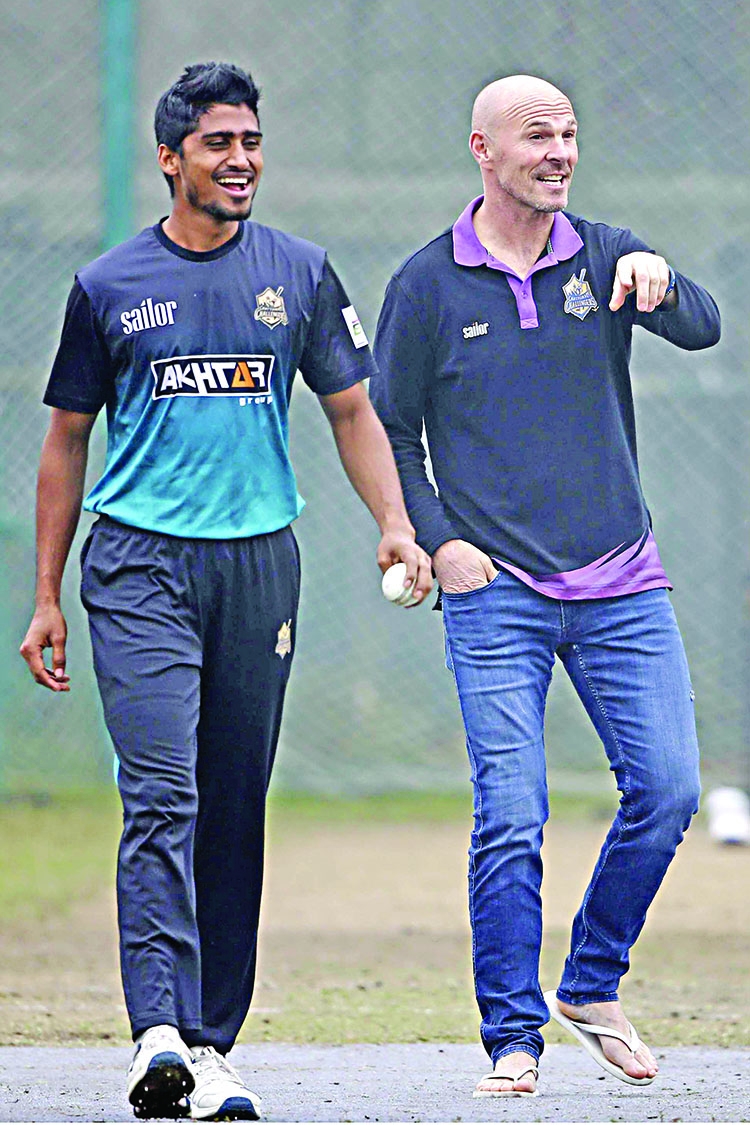 Chattogram Challengers pacer Mehedi Hasan Rana alongside coach Paul Nixon captured during practice session recently. -Collected
The Bangabandhu Bangladesh Premier League (BBPL) will see a new champion as Rajhahi, Khulna and Chattogram are desperately eying maiden BBPL title. Since the past couple of BPL season, the trophy has been won by either Dhaka or Cumilla.
In the first two editions in 2013 and 2013, Mashrafe-led Dhaka Gladiators won the titles. Cumilla Victorians however made a memorable debut in 2015 as they emerged champion in their maiden BPL entry.
Dhaka regained the title in 2016 with their new name "Dhaka Dynamites". Rangpur Riders however became the new champion in 2017 under new ownership while Cumilla Victorians captured the coveted trophy for the second time in last edition.
This year, with the elimination of the Dhaka "Dhaka Platoon" on Monday with Cumilla and Rangpur's early exit, it was confirmed that the ongoing Bangabandhu Bangladesh Premier League (BPL) is all set to see a new champion.
Khulna Tigers have made their maiden appearance in BPL final this year after trouncing Rajshahi Royals on Monday night.  While the Chattogram and Rajshahi have reached the final once but lost on both occasions. Chattogram will meet Rajshahi in a high-voltage encounter when they take on each other in the BPL second eliminator today.
After month long league matches in Dhaka, Sylhet and Chittagong - mismatches, in some cases -Bangladesh Premier League special edition is passing the final week, the most important week.
It is going to be one of the most gripping contests in the BPL when Mahmudullah-led Chattogram Challengers take on Andre Russell-led Rajshahi Royals in the eliminator to be played at Sher-e-Bangla National Cricket Stadium in Mirpur.
Both the teams faced each other twice in the league stages with a win each for both the teams. But the last time Rajshahi and Chattogram met on last Saturday, all-round Rajshahi bludgeoned the Challengers that time in a one-sided game.
Just four days down the line, the two teams meet again today in a most important match of BPL. Some of the BPL's leading run-getters and match-winners will face off today, in the second eliminator and of course, the winner of this virtual semi-final will face Khulna on Friday in the grand finale.
However, Mahmudullah and Co will not leave any chance for Rajshahi to repeat what they have achieved in the previous fixtures. Although Chattogram started with a great promise in this season but in the middle they lost the momentum but finally they were back with bang with all-round performance from their players, especially Imrul Kayes.
Credit should also be given to pacer Mehedi Hasan Rana who proved vital for the team. Handed over the captaincy in absence of Mahmudullah, Kayes led from the front with sublime batting. Mahmdullah also hit back in form after returning. He struck a match-winning knock on Monday to eliminate Dhaka.
Rajshahi on the other hand will have revenge on their mind. They suffered heavy defeat in the first qualifier against Khulna on Monday night. But Rajshahi can easily make a comeback today as they have a bunch of local of international performers.
Rajshahi's top-order was the key behind their success through the campaign. Openers Liton Das and Afif Hossain played consistent cricket throughout league stage and confirmed playoffs berth comfortably. Skipper Andre Russell, Shoaib Malik, Ravi Bopara proved crucial on many occasion this season.