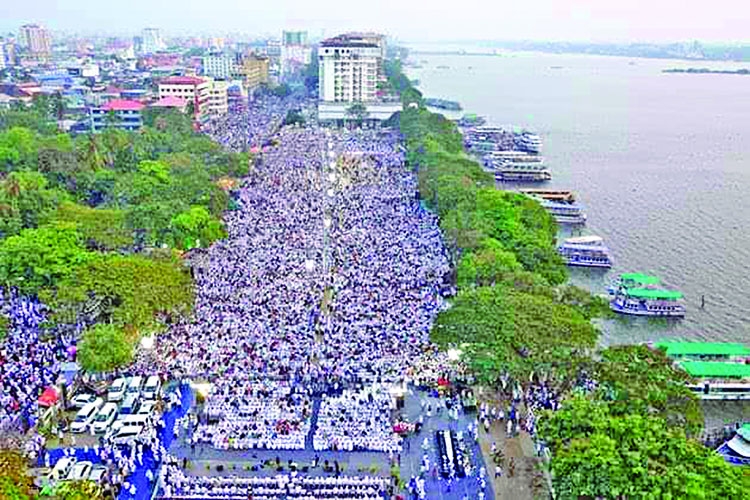 In this photo taken on January 1, 2020 protesters gather for a demonstration against India's new citizenship law, at a rally organised by various Muslim groups, in Kochi in southern Kerala state. -Getty/AFP
Demanding the repeal of Citizenship Amendment Act, the Kerala government led by Pinarayi Vijayan moved the Supreme Court on Tuesday, saying the amended law violated Articles 14, 21 and 25 of the Constitution and the basic structure of secularism in India.
With this, Kerala becomes the first state to approach the apex court against the Citizenship Amendment Act, which has seen unprecedented protests all over the country. In its petition, the Kerala government has demanded that the CAA should be declared violative of Articles 14, 21 and 25 of the Constitution.
Article 14 promises Right to Equality to all while Article 21 says "No person shall be deprived of his life or personal liberty except according to a procedure established by law" and Article 25 mandates "all persons are equally entitled to freedom of conscience".
While chief ministers of non-BJP ruled states like Mamata Banerjee have announced no implementation of CAA in the state, Kerala was the only state to pass a joint resolution on 31 December with the ruling CPM-led LDF and Opposition Congress headed UDF coming together to take the Legislature route to register its opposition, reports Firstpost.
While presenting the resolution, Chief Minister Pinarayi Vijayan said the CAA was against the "secular" outlook and fabric of the country thereby spearheading religion-based discrimination.
"The Act contradicts the basic values and principles of the Constitution. In view of the anxiety among the people of the country, the Centre should take steps to drop the CAA and uphold the secular outlook of the Constitution," he said.At the forefront of the Opposition, Vijayan on 3 January had written to his counterparts in 11 states on the need to save secularism and democracy.
Referring to the chief ministers, including Mamata and Delhi chief minister Arvind Kejriwal, Vijayan in the letter said, "Apprehensions have arisen among large sections of our society consequent to the Citizenship Amendment Act, 2019. The need of the hour is unity among all Indians who wish to protect and preserve our cherished values of democracy and secularism."
On 10 January, the state government had published anti-CAA advertisements in the front page of national dailies, a move that was criticised by the state's governor as "thoroughly undesirable".
The state-sponsored advertisement said that "the state was leading the efforts to protect constitutional values" and its Assembly was the first to pass a unanimous resolution against the controversial law.
---Agency