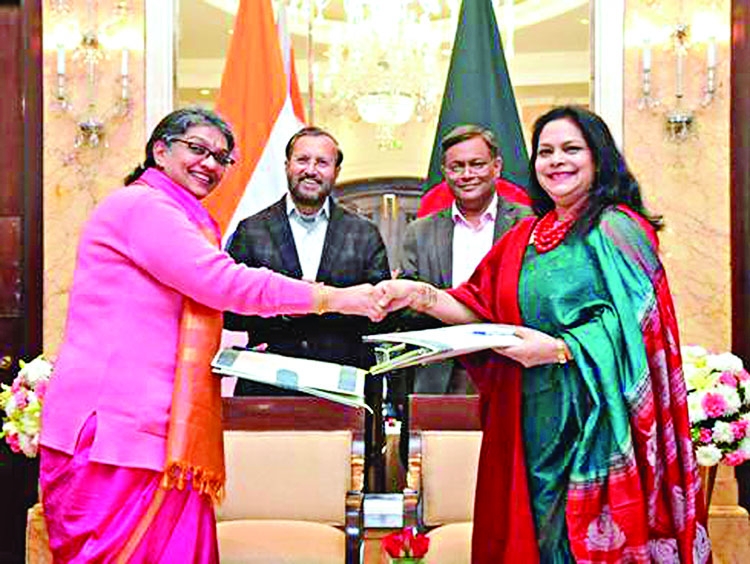 Information Minister Dr Hasan Mahmud and his Indian counterpart Prakash Javadekar formally launched the broadcasting program between Prasar Bharati and Bangladesh Betar on Tuesday. -PIB, India
Bangladeshi and Indian state-run radios on Tuesday launched a broadcast exchange programme enabling audiences to listen to Bangladesh Betar and Akashvani radio in both the countries.
Information Minister Dr Hasan Mahmud and his Indian counterpart Prakash Javadekar jointly launched the broadcasting programme between Prasar Bharati and Bangladesh Betar.
"Bangladesh Betar is now being heard across India while Akashvani, also now could be heard in Bangladesh," a Bangladesh information ministry statement said, reports BSS. It said a Memorandum of Understanding (MoU) was signed between the two state-run radios in April 2018 regarding broadcasting programmes of Bangladesh Betar, but it was not implemented so long.
Officials familiar with the development said listeners of both the countries, especially the people in Tripura and West Bengal, would be able to hear Bangladesh Betar's programmes terrestrially while rest of India through using DTH (Direct to Home) service.
They said the people of Kolkata could now listen to the Bangladesh Betar programs tuning FM 100.1 megahertz through Akashvani Channel while people of Agartala could hear it tuning FM 101.6 megahertz.The Betar progarrmes could also be heard in India from 7.30 am to 9.30am and 5.30 pm to 7.30pm through Akashbani apps and DTH as well.
The audience of Akashvani, also known as All India Radio, in Bangladesh could hear the Indian radio programmes tuning FM 108 megahertz.They said listeners from across the globe would also be able to enjoy Bangladesh Betar's programmes by downloading www.newsonair.com apps from now on.
Hasan took the initiative to launch the broadcasting of Betar's programmes by All India Radio in line with the agreement after he assumed the charge of the information ministry.
Speaking on the occasion, Hassan recalled India's contribution to Bangladesh's 1971 Liberation War and said that the relations between the two friendly countries now reached a newer height during the tenure of Prime Minister Sheikh Hasina and her Indian counterpart Narendra Modi.He wished that the existing bilateral relations between the two neighbouring countries would further deepen in the years to come for mutual benefit.
In this connection, he emphasized accelerating media and cultural exchange programs to enhance technical, cultural and institutional know-how of the people of Bangladesh and India.
On India-Bangladesh Joint Venture Program to produce the biopic of Father of the Nation Bangabandhu Sheikh Mujibur Rahman, he hoped that production of the film would be completed in scheduled time.

Indian Information and Broadcasting Minister Prakash Javadekar said that Bangladesh and India have "organic relations" and this bond of friendship would be further strengthened in future as both the countries have a "shared legacy".He said more programs have to be produced especially on environment to create awareness among the people to save lives and nature through joint cooperation.
He said Bangladesh and India have been enjoining excellent bilateral relations which also got momentum during the tenure of the two leaders- Prime Minister Narendra Modi and Prime Minister Sheikh Hasina.
Bangladesh High Commissioner-in-Charge Rokibul Huq, Director General of Betar, Managing Director of BFDC and senior mission officials accompanied the minister in the meeting. The Indian minister was accompanied by senior officials of the ministry of information and external affairs.