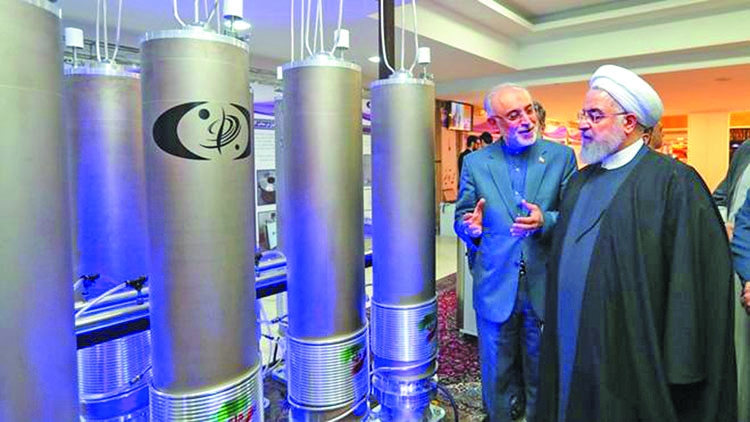 Iran says it suspended its nuclear commitments in response to the reinstated US sanctions. -EPA
European powers have triggered a formal dispute mechanism over Iran's breaches of key parts of the 2015 nuclear deal - a move that could spell its end.Iran has gradually lifted all limits on its production of enriched uranium, which can be used to make reactor fuel but also nuclear weapons.
It has said it is entitled to do so in response to sanctions reinstated by the US when it abandoned the deal in 2018. France, Germany and the UK said they did not accept Iran's argument.
The mechanism, set out in article 36 of the deal, involves the dispute being referred to a Joint Commission that will have a minimum of 15 days to resolve the issue. If the complainants are still not satisfied, they can refer the matter to the UN Security Council, which could vote to reimpose any sanctions lifted under the deal.
This would be the end of the deal. Iran's foreign ministry accused the Europeans of abusing the process and said they "must be prepared to accept the consequences". But the ministry spokesman said Iran was "ready to... make constructive attempts to maintain international agreements and would welcome any practical initiatives in this regard".
Russia also criticised the Europeans' move, saying the activation of the mechanism could make a return to implementation of the deal impossible.A Foreign Ministry statement quoted by Russian media described the decision as "deeply disappointing and extremely concerning".
In a joint statement, the French, German and British foreign ministers reiterated their regret at the US decision to withdraw from the nuclear deal, which is formally known as the Joint Comprehensive Plan of Action (JCPOA).
The ministers said their countries - referred to as the E3 - had worked hard to bring Iran back into compliance since it began suspending its commitments last July and that they had undertaken diplomatic initiatives to de-escalate tensions and to bring Iran and the US to the negotiating table for a comprehensive solution.
"The E3 remain fully committed to this diplomatic effort and intend to resume it as soon as conditions allow," they added. "However, in the meantime Iran has continued to break key restrictions set out in the JCPOA. Iran's actions are inconsistent with the provisions of the nuclear agreement and have increasingly severe and non-reversible proliferation implications."
The ministers said Iran's decision on 5 January to suspend the last key commitment on uranium enrichment - the limit on the number of uranium centrifuges - had left them with no choice but to take action.
"We do this in good faith with the overarching objective of preserving the JCPOA and in the sincere hope of finding a way forward to resolve the impasse through constructive diplomatic dialogue, while preserving the agreement and remaining within its framework," they added."In doing so, our three countries are not joining a campaign to implement maximum pressure against Iran."
---Agency