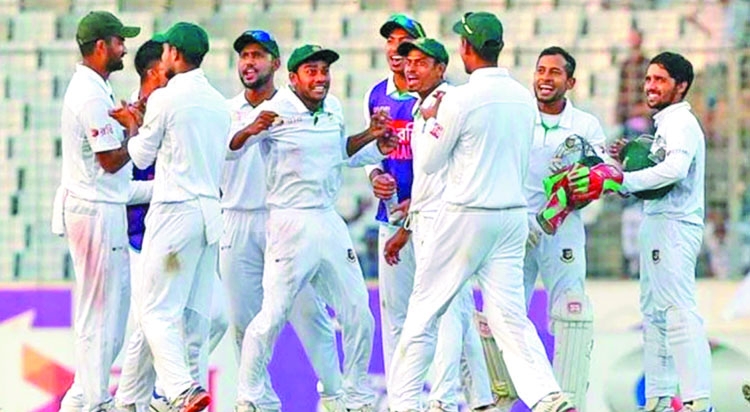 Bangladesh have agreed to visit Pakistan to play Tests along with the shorter formats of cricket, clearing the clouds of uncertainty over the tour because of security concerns. The Tigers will tour Pakistan three times to play three Twenty20 Internationals, one One-Day International and two Tests between Jan 24 and Apr 9, according to the Pakistan Cricket Board.
The schedule was agreed in a meeting between Bangladesh Cricket Board President Nazmul Hassan and PCB boss Ehsan Mani on the sidelines of International Cricket Council Government Committee meet in Dubai on Tuesday afternoon, the PCB said, reports bdnews24.com. ICC Chairman Shashank Manohar facilitated the process, it added.According to the revised agreement, Bangladesh will play three T20s in Lahore from Jan 24-27.
They will return to Pakistan for the first ICC World Test Championship fixture, to be held from Feb 7-11 in Rawalpindi. The Tigers will tour Pakistan again to play one ODI on Apr 3 and the second Test from Apr 5-9 in Karachi.
"I am pleased that we have amicably achieved a resolution that is in the best interest of this great sport as well as both the proud cricket playing countries," Mani said in the announcement, thanking Manohar for "the leadership he provided".
"It is a win-win outcome for both the boards. I am glad that the uncertainty around the series is now over and we can start planning for the smooth delivery of the matches," it quoted PCB CEO Wasim Khan as saying.The visit "should" give Bangladesh "the comfort that Pakistan is as safe and secure as any other cricket playing country", he added.
Nazmul had earlier proposed that Bangladesh play T20s in Pakistan first and watch the security arrangements before they agree to play Tests there.
As Pakistan continued to push for the longest version of the game to be played there, he had said Bangladesh had not been certain about playing T20s in Pakistan, let alone a Test series.
The PCB was hopeful the full tour would go ahead given that Sri Lanka had returned to the country for the Test series after a 2009 militant attack on Sri Lanka's team bus in Lahore left six security personnel and two civilians dead and six players injured.

Most of the coaching staff and some of the players are unwilling to play in Pakistan while some others agreed to travel to the country for a short time only, Nazmul had said last month."The most important thing is that their families are worried," he had added.
But on Tuesday, he expressed his satisfaction over the consensus with the PCB."It's a shining example that we sincerely honour the ICC Future Tours Programme," he said in a statement, thanking the PCB for "understanding our position".