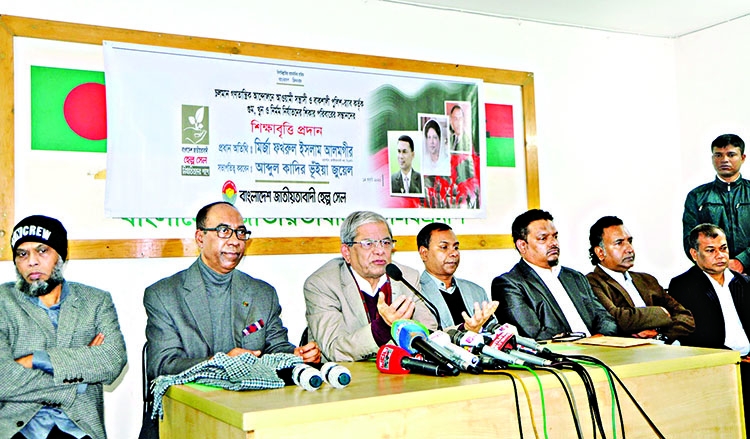 BNP secretary general Mirza Fakhrul Islam Alamgir speaking at a program at BNP chairperson's Gulshan office on Tuesday. -AA
BNP on Tuesday alleged that "pro-Awami League" officials have been given the responsibility for conducting the elections to two Dhaka city corporations billed for January 30.
BNP secretary general Mirza Fakhrul Islam Alamgir said, "We know those having pro-AL backgrounds given the responsibility for holding elections to the two city corporations.
We also know who went to a minister for getting approval for a vehicle and who took the government land for getting permission for one's own school."The BNP leader came up with the assertion while speaking at a program at BNP chairperson's Gulshan office on Monday.
He said, "Those who lack ethical values have been given charges to conduct voting through EVMs. Most countries have already rejected these machines as those can be manipulated."
He also said their party is against the use of electronic voting machines (EVMs) in the city polls as it thinks people's verdict will not be reflected if the voting is held with the machines.
About Monday's by-polls to Chattogram-8 constituency, he said voters were not allowed to go to the polling stations as the ruling party supports exploded hand bombs and attacked people with sticks.
"Many people may say we couldn't prevent such acts. How the gentlemen and common people will tackle the hooligans and those resort to terrorism. This is the reality.
Common voters don't engage in violence and they want to cast their votes, but they aren't allowed to do so," Fakhrul observed.He alleged that the government is turning Bangladesh into a failed state by snatching people's voting rights.
The BNP leader, however, urged their party people not to get frustrated. "Never give up, no matter how much suffering, pains and repressions you are going through. The people of the country will stand up and put up a resistance as they did repeatedly in the past."
Bangladesh Jatiyatabadi Help Cell arranged the program and provided financial assistance to the family members of the party's 10 leaders who were either subjected to enforced disappearance, killing or maiming by law enforcers and ruling party 'cadres'.Fakhrul alleged that Awami League has long been resorting to serious repressive acts using the state machinery to hang onto power by 'restoring' one-party rule.
"They (govt) turned the entire country into a torture cell. Those of us took to the streets protesting the government's misdeeds,  many of them were made disappeared and went missing after being picked up by law enforcers and many others were killed or sent to jail," he alleged.
Fakhrul urged all to be united to get rid of the country's current situation.The BNP leader said the ruling party has created such an appalling situation in the country that even the journalists are now imposing self-censorship to avoid the government's wrath.