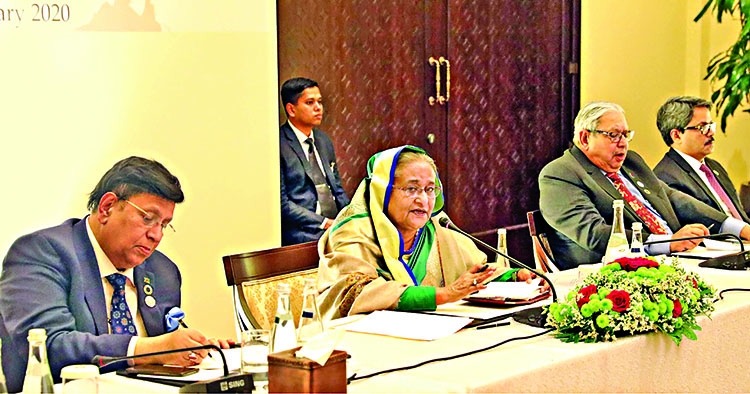 PM Sheikh Hasina has asked Bangladesh ambassadors in Middle Eastern countries to strengthen ties with Muslim countries at the envoys conference on Monday night. -Focus Bangla
Prime Minister Sheikh Hasina has asked Bangladesh ambassadors in Middle Eastern countries to strengthen ties with Muslim countries, exploring new markets for Bangladesh products there and draw their investment to the country.
"Reinforce relationship with Muslim countries . . . explore new markets of our products there and draw their enhanced investment to Bangladesh," Premier's Press Secretary Ihsanul Karim told newsmen quoting her as saying at the envoys conference on Monday night.
The Prime Minister, he said, asked the Bangladesh envoys to act in line with demands of the host countries to accomplish their goals of exploring Bangladesh markets and draw investments.
Sheikh Hasina simultaneously asked the envoys to use their diplomatic expertise in resolving any misunderstanding with friendly countries including neighbors saying such situations could emerge in foreign relations but those should be resolved through dialogues, reports BSS.
The conference was held at her place of residence, Shangri-La Hotel here on Monday night Bangladesh time as the premier is now on a visit to the United Arab Emirates (UAE).
"You would have to work bearing in mind that the world is now considered as a "global village". Each one is depended on another one. So, everyone should move ahead with the mentality of extending assistances to each other," she said.
The premier asked them to protect Bangladesh workers interest abroad simultaneously reminding all that they were sending the maximum remittance from the Middle East countries.
But she said Bangladeshi workers often were exposed to cheating while collective and coordinated efforts of all were needed for their protection particularly asking for a massive campaign so no overseas jobseekers fall victims to the fraudulence.
Sheikh Hasina also asked for necessary measures to stop charging money beyond the official rate for sending an overseas jobseeker to any country, saying, "we all should look into the matter".
She said Bangladeshi expatriates continued to contribute massively to strengthen the country's economy while the government by now established "Probashi Kolyan Bank" for their welfare.
"The expatriates can take loan from the bank for conducting businesses," she said.The premier said Father of the Nation Bangabandhu Sheikh Mujibur Rahman had given the nation a foreign policy with its main essence being "Friendship to all, malice to none."
She said the government was now working with the blue economy to unlock its potential to elevate further its economic status while the country was once needed to struggle to take loan from the donors."But the situation has changed as Bangladesh has come out of that . . . now we don't call anyone a donor, rather the development partner," Sheikh Hasina said.
The premier said her government has been working to reduce the poverty rate to three more percent as it has already reduced to 20 percent.She also said her government has contained the terrorism and militancy with its own mechanism, adding, "The effort will be continued."
The premier informed another book titled "Amar Dekha Naya Chin" written by the Father of the Nation is being published.About observance of "Mujib Borsho", the premier said, "It is a great fortune for us to get a chance to observe the "Mujib Borsho".
She said many programs will be held in Bangladesh as well as in the foreign countries when the Bangladeshi envoys would have to take measures to this end."We have got self identity and passport as the Father of the Nation liberated the country," the premier said.
Foreign Minister Dr AK Abdul Momen, Expatriates' Welfare and Overseas Employment Minister Imran Ahmad, State Minister for Power, Energy and Mineral Resources, Nasrul Hamid, State Minister for Foreign Affairs Md Shahriar Alam, and Foreign Secretary Masud Bin Momen, were present, among others.The Bangladeshi envoys in the nine Middle East countries were present at the conference.
They were Golam Moshi (Saudi Arabia), Muhammad Imran (UAE), Maj Gen (Retd) KM Mominur Rahman (Bahrain), AFM Gousal Azam Sarker (Iran), AMM Forhad (Iraq), SM Abul Kalam (Kuwait), Abdul Motaleb Sarker (Lebanon), Md Golam Sarwar (Oman) and Ashud Ahmed (Qatar).
--BSS