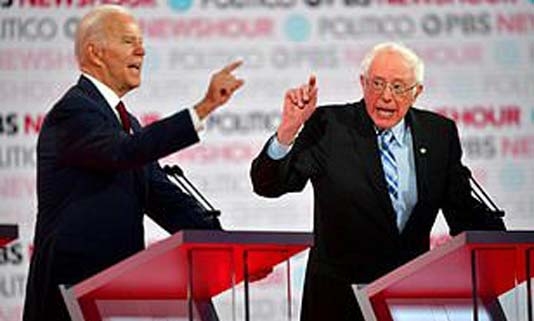 US Democrats braced for fireworks at Tuesday’s presidential debate, with liberal Bernie Sanders signalling he could clash with rivals in the final showdown before voters in Iowa kick off the nomination process.
No clear frontrunner has emerged in the Midwestern state, and the six candidates will take the stage with everything to play for just 20 days before Iowans cast their ballots.
While former vice president Joe Biden, the 77-year-old establishment candidate, is leading national polling, he and Vermont Senator Bernie Sanders are in a dead heat in Iowa, followed closely by former South Bend, Indiana mayor Pete Buttigieg and Senator Elizabeth Warren of Massachusetts.
Minnesota Senator Amy Klobuchar and billionaire California activist Tom Steyer round out the field for the nationally televised debate in Iowa’s capital Des Moines.
The two-hour debate set for 8:00 pm local (0200 GMT Wednesday) will feature the smallest field yet — and its whitest, with no people of color qualifying for the first time in the 2020 race.
The Democratic Party last year hailed its historically diverse presidential lineup, but minority candidates have fallen by the wayside, the latest being African-American Senator Cory Booker, who dropped out on Monday.
Ahead of the Iowa vote, each candidate will be scrambling for a breakout moment that could translate into the first tangible victory in a tight contest.
After avoiding open confrontation so far, the two leading liberals, Sanders and Warren, engaged in open sniping on Monday which appeared set to carry over to the debate stage.
– Progressive feud –
CNN reported that Sanders told Warren in a private meeting in late 2018, as they both contemplated presidential runs, that he did not believe a woman could defeat Trump.
The 78-year-old Sanders called the report “ludicrous,” but Warren then released a statement saying that was indeed what Sanders told her.
“I thought a woman could win; he disagreed,” she said.
Sanders also reportedly chided Warren, 70, as a candidate of the elite, prompting a brush back by his Senate colleague who said she was “disappointed” by the report that Sanders had urged volunteers to “trash” her.
Fortified by his showing in recent polls despite suffering a heart attack last November, Sanders also went on the offensive against Biden.
Sanders criticized then-senator Biden’s vote in support of going to war in Iraq, a subject that has gained renewed interest following Trump’s order to kill a top Iranian general in Baghdad and the subsequent fallout.
“It is appalling that after 18 years Joe Biden still refuses to admit he was dead wrong on the Iraq War, the worst foreign policy blunder in modern American history,” Sanders senior advisor Jeff Weaver said in a statement.
On Tuesday Sanders released a blistering three-minute video attacking Biden for his Iraq vote, support for “disastrous” trade agreements, and calls from years ago to cut Social Security.
“I just don’t think that Biden’s record is going to bring forth the energy that we need to defeat Trump,” Sanders tweeted.
The president meanwhile sought to thrust himself into the spotlight. A plane circled over Des Moines Tuesday pulling a banner that read “Trump fights for Iowa farmers,” while the president hosts a campaign rally in neighboring Wisconsin, a key swing state, as Democrats take the stage.
The debate risks being overshadowed by another historic political drama: Trump’s looming impeachment trial in the US Senate, which, if it begins next week, would force four presidential candidates to stay in Washington serving as jurors in the proceedings instead of winning over undecided Iowa voters.
Polling is tight in Iowa, with Biden at 20.7 percent support and Sanders, Buttigieg and Warren all less than five percentage points back, according to a RealClearPolitics average of recent polls.
Klobuchar, credited with a crisp performance in the previous debate, was well behind, at seven percent. Steyer is at 2.7 percent.
With Iowans fretting over who would be best positioned to defeat Trump, the race is volatile; each of the top four candidates has led at least one major state poll in the last two months.