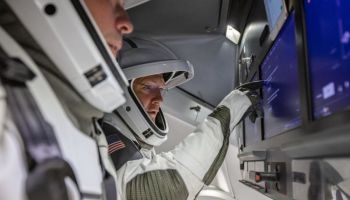 NASA and SpaceX are preparing to launch the final test before astronauts fly aboard the Crew Dragon spacecraft and Falcon 9 rocket to the International Space Station (ISS) as part of its Commercial Crew Program, NASA said Monday.
The test, known as in-flight abort, will demonstrate the Crew Dragon's escape capabilities -- proving that its abort system can protect astronauts in the event of an emergency during launch.
The uncrewed flight test is targeted for 1300 GMT on Jan. 18, at the start of a four-hour test window, from Launch Complex 39A in Florida, according to NASA.
SpaceX performed a full-duration static test on Saturday of the Falcon 9, and completed a static fire of the Crew Dragon on Nov. 13, setting the stage for the critical flight test.
Prior to launch, SpaceX and NASA teams will practice launch day end-to-end operations with NASA astronauts, including final spacecraft inspections and side hatch closeout.
After liftoff, Falcon 9's ascent will follow a trajectory that will mimic a Crew Dragon mission to the ISS matching the physical environments the rocket and spacecraft will encounter during a normal ascent, according to NASA.
For this test, SpaceX will configure Crew Dragon to intentionally trigger a launch escape prior to 90 seconds into flight to demonstrate Crew Dragon's capability to safely separate from the Falcon 9 rocket in the event of an in-flight emergency.
SpaceX's uncrewed in-flight abort demonstration test of Crew Dragon's launch escape capabilities is designed to provide valuable data toward NASA certifying SpaceX's crew transportation system for carrying astronauts to and from the ISS, according to NASA.