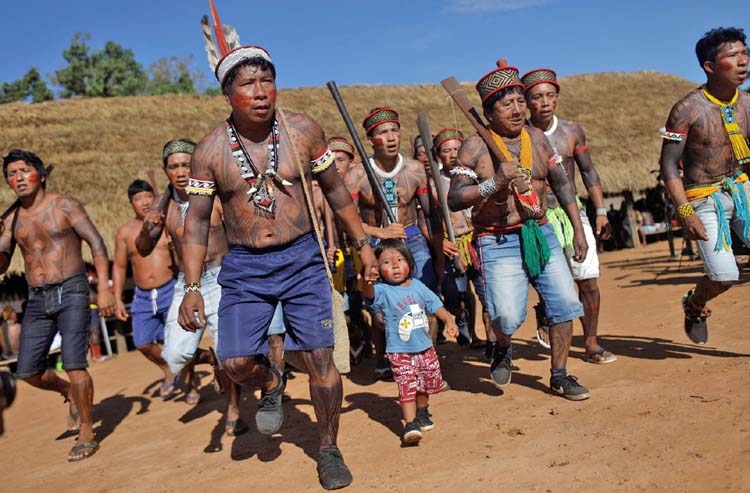 Indigenous people of Yudja tribe, perform a greeting dance during a four-day pow wow in Piaracu village, in Xingu Indigenous Park, near Sao Jose do Xingu, Brazil, Tuesday. -Reuters
Brazilian indigenous leaders began a four-day tribal gathering in the Amazon on Tuesday to plan their opposition to far-right President Jair Bolsonaro's push to open their reservations for commercial mining and agriculture.
Protected tribal lands have seen increasing invasions by illegal loggers and miners since Bolsonaro became president last year, leading to a rise in deforestation, fires and deadly clashes on several reservations. Bolsonaro has vowed to integrate Brazil's roughly 900,000 indigenous people into the broader economy and society, while tapping the mineral riches and commercial farming potential of their 462 reservations.
Environmentalists say such a move will speed up clearing of the Amazon jungle, the world's largest tropical rainforest, which is considered vital for slowing global climate change. "The riches Bolsonaro speaks of are white man's riches, to buy cars and planes and ranches. Our riches are in the forest and the rivers here," Kayapo tribe leader Megaron Txucarramae told Reuters.
This week's gathering at a village in the Xingu park was hosted by Kayapo chief Raoni Metuktire, who became a global reference for his environmental campaigning in the 1980s with musician Sting at his side.
"The year begins with this big meeting called by Raoni to draw up strategies to protect the Amazon from the threats, the criticism and the destruction that the Bolsonaro government is causing," Sonia Guajajara, head of an umbrella group called the Articulation of the Indigenous Peoples of Brazil (APIB), told Reuters en route to Xingu in the frontier state of Mato Grosso.
---Reuters, Brazil