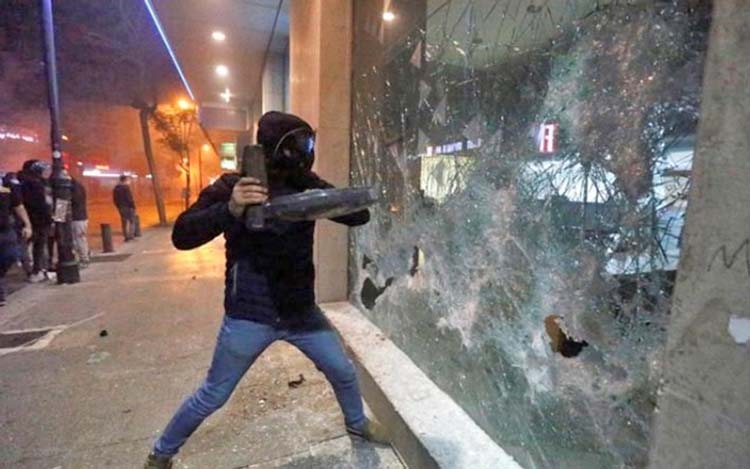 Protesters smash the window of a bank as demonstrations against the government continue in Beirut, Tuesday. -Reuters
Lebanese security forces fired tear gas to disperse protesters outside the central bank on Tuesday night, facing off with dozens of people who pelted them with stones and fireworks. Security forces also fired live rounds into the air, a Reuters witness and two local broadcasters said.
Protesters set garbage dumpsters on fire and threw tear gas canisters back at riot police as ambulance sirens rang out. Young men, their faces covered, smashed bank storefronts and ATMs, another Reuters witness said. A wave of protests erupted last October against a ruling elite accused of steering Lebanon towards its worst economic crisis since the 1975-1990 civil war.
Since Saad al-Hariri resigned as prime minister in late October, politicians have failed to agree on new government or a rescue plan. The Lebanese pound has weakened on the parallel market, a hard currency squeeze has driven up prices and confidence in the banking system has been battered.
"Everything we're suffering from is because of the banks and the central bank's policies," Ali, a 21-year-old college student, said at the protest in Beirut's Hamra commercial district. "This is why there's no longer any money, and prices are rising."
He said tight controls that banks have imposed, limiting dollar withdrawals and blocking most transfers abroad, have also fuelled outrage. "They won't give people their own money."
The head of the banking association told Reuters this week that the curbs sought to "preserve the wealth of Lebanon, and Central Bank Governor Riad Salameh says deposits are safe. The civil defence said it treated some protesters and police who suffered injuries on Tuesday, without giving a toll.
Lebanon's internal security forces called on protesters to leave Hamra street "for their safety or else they will be deemed rioters and will be chased."
--Reuters, Beirut