France reaffirms Sahel presence but root cause of crisis unsolved 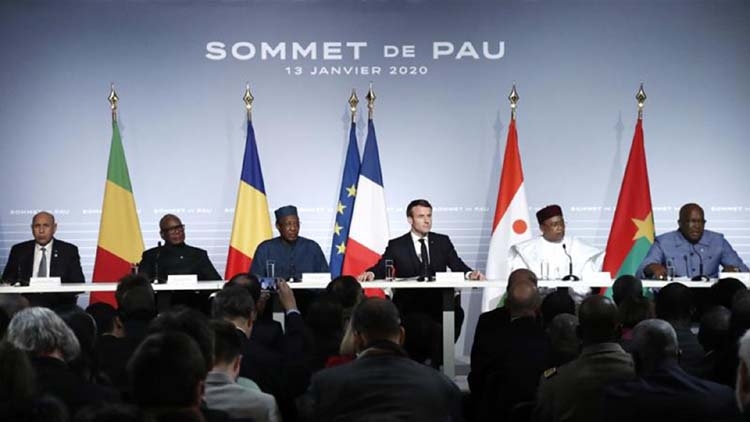 G5 nations expressed a desire for continued French military involvement and Macron promised more support at the summit, on Monday. -Reuters
French President Emmanuel Macron hosted his counterparts from five Sahelian countries - Burkina Faso, Chad, Mali, Mauritania and Niger - for a critical summit to review military intervention in the region and the fight against armed groups amid a worsening security situation, On Monday.
Macron had called for the meeting in the southwestern city of Pau in December, complaining of a lack of "clear political condemnation of anti-French feelings" among the countries comprising the G5 Sahel organisation and threatening a withdrawal of 4,500 French troops stationed in the region in the wake of a series of anti-France protests.
At the summit, France committed an extra 220 troops to Barkhane, its military force countering armed groups in the region. Paris also pledged to implement an intelligence-sharing agreement and integrated military command structure with the G5 nations and said it would ramp up intervention in the "tri-borders" region of Burkina Faso, Niger and Mali, where much of the violence that began plaguing the area in 2012 has taken place.
But although Macron promised more support and the G5 nations expressed a desire for continued French military involvement, analysts suggest the leaders failed to address political solutions to a crisis which killed more than 4,000 people in 2019. "Macron got what he wanted [in Pau], which is a clear and strong reaffirmation by the G5 Sahel countries for French military engagement in the region," said Flore Berger, of the International Institute for Strategic Studies.
"While Macron implied [in December] that he could withdraw troops ... this was never a realistic option. The tendency is towards closer cooperation and more involvement. France cannot afford to leave Mali now that the situation is sharply deteriorating."
Barkhane has so far produced scant results in stemming the security crisis, with attacks in Mali and Burkina Faso currently occurring on a near-daily basis.
Meanwhile, in recent weeks Niger has experienced a string of big attacks on army posts, including one in Inates on December 10 that killed 71 soldiers and another in Changodar on January 9 that left 89 troops dead.
Paul Melly, an analyst at Chatham House, pointed out that the leaders in Pau "publicly stated, for the first time, that the priority focus" will be the campaign against the Islamic State in the Greater Sahara (ISGS), an ISIL affiliate that has staged a wave of deadly attacks in recent months.
But many analysts appear to agree that a continuation of France's military strategy will not bring a swift end to the violence, stressing that political goals need to be met for a return to peace.
"The announcements made seem to further entrench a military strategy led by France that has been failing to provide security and stability in the region for years now," said Joe Penny, a journalist and co-founder of The Sahelien, a news site focused on the region. "Where are the efforts beyond sending more troops and giving more control to the French military? Why haven't key elements of the Algiers peace agreement been implemented, almost six years later?" he asked.
The Algiers peace agreement, signed in the Malian capital of Bamako in 2015, was designed to reduce violence in Mali and the wider region. Alongside military intervention undertaken by France, the United Nations and G5 countries, it outlined targets for development which have not been met.
---Reuters, Burkina Faso