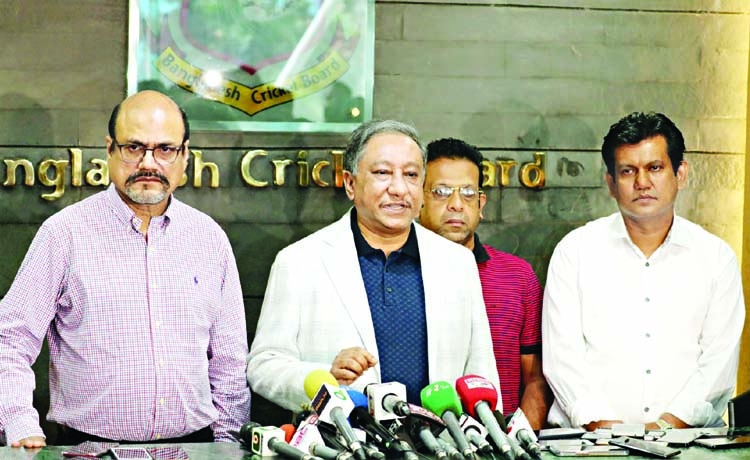 BCB president Nazmul Hasan Papon (M) briefs the media. -Collected
Bangladesh Cricket Board (BCB) president Nazmul Hasan Papon claimed that the BCB has basically worked in line with the government's suggestion to stay for a short period each time they would visit the country.
"Firstly PCB told us to play three T20s and one Test but I said no and said that we will play only three T20 matches before visiting there later," Papon said on Wednesday after landing in Dhaka following his visit in Dubai.
He also insisted the decision to include an ODI to the existing two-match Test series and three T20 Internationals came up to help Pakistan earn some revenues as their expenditure has been expanded due to host Tigers in three legs in the upcoming tour within four months.
"Pakistan is facing a huge financial loss [for hosting us on three occasions] and therefore they offered us to play one T20 [ahead of Test] as that will give them some revenue. Their cost has increased a lot as we are going thrice and in this little time they cannot do marketing," he said.
"We needed practice match and we felt that if we play ODI than we can practice more [and they can generate some revenues]," he added.
The BCB and PCB were able to reach an agreement on Tuesday to ensure Bangladesh's upcoming tour of Pakistan would go ahead as planned. Bangladesh were originally scheduled to play three Twenty20 internationals and two Test but the future of the series looked to going nowhere after the BCB refused to stay there for long period of time as the government advised them to stay for a short period due to the prevailing unrest in the Middle East.
However, after Shashank Manohar, ICC's Chairman, acted as the facilitator between the two boards it was agreed upon that the tour will take place but PCB will have to host them on three occasions as the tourist are only ready for a short stay.
As per revised schedule, Bangladesh will play three T20s in Lahore within January 24-27 before playing the first Test in Rawalpindi on February 7-11. They will then play an ODI (April 3) and the second Test (April 5-9) in Karachi. "I was supposed to go and meet ICC chairman Shashank Manohar as I had given him word and was supposed to meet him. PCB officials were already there when I arrived and they [PCB officials] told us that they want to sit with me," the BCB boss said.
Papon added that he is not too sure why their decision of visiting Pakistan on three occasions inside four months is being criticized as they have acted as per the desire of the government.
"The Government told us for short stay and what we were saying it is exactly written there [in the MOU]. We will play the Test matches after considering the situation and we are still maintaining it [as far as the tour is concerned]," he pointed out. "I do not know why they are criticizing and I am finding it strange because we always said we will play the T20 first. It remained the same way," he concluded.