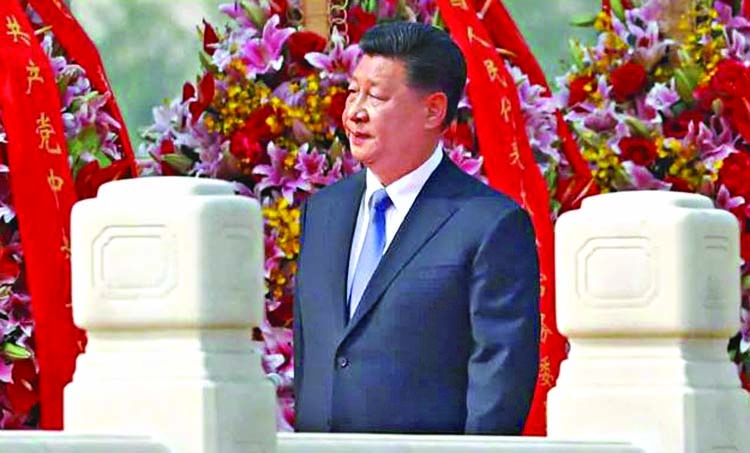 China's President Xi Jinping
China's President Xi Jinping arrives in Myanmar this week to nail down multi-billion-dollar infrastructure deals in a country abandoned by many in the West appalled at the "genocide" of Rohingya Muslims on leader Aung San Suu Kyi's watch.
Xi's two-day visit, his first as president, will seek to cement Beijing's position as Myanmar's largest investor and strategic partner.
The much-trumpeted China-Myanmar Economic Corridor (CMEC) aims to connect the Middle Kingdom to the Indian Ocean, a key route in Beijing's Belt and Road Initiative that envisions Chinese infrastructure and influence spanning the globe.
In addition to offering tens of billions of dollars in investment, China shields its neighbour at the United Nations, where pressure is mounting for accountability over the Rohingya crisis. Yet the relationship between the countries is tangled.
Ethnic conflicts sizzling in border zones and the impact of dams, pipelines and transport links risk awakening hostility over Chinese intentions. For China, it is "time to get things back  on track", historian Thant Myint-U wrote in his latest book. The headline deal will likely be a colossal factory zone and deep-sea port in Rakhine state, which lies on Myanmar's west coast beside the Bay of Bengal.
Myanmar successfully slashed the cost of Kyaukphyu port from $7.2 billion to $1.3 billion, reducing the chance of it turning into a debt trap.
Like other Chinese-led projects, however, public details are scant. Rakhine's northern fringes saw 740,000 Rohingya forced out in a bloody military crackdown in 2017.
The state remains the stage for a civil war between the military and an ethnic Rakhine rebel group. Undeterred, Myanmar has declared the area open for business. While Western investors have shunned the opportunity, China -- competing against other regional giants -- has few such qualms.
Billions of cubic metres of gas and millions of barrels of oil from offshore rigs are pumped each year across the country to China. Beijing now wants to secure plans for a high-speed rail link between the port and China's landlocked Yunnan province.
Other key projects include industrial zones on the shared border and a makeover for commercial hub Yangon.Analyst Richard Horsey said the visit brings both huge opportunity and enormous risk for Myanmar."They feel they're again over-reliant on China and that's a very dangerous place to be."
China already holds the largest share -- around $4 billion or 40 percent -- of Myanmar's foreign debt. The future of a suspended, Beijing-backed mega-dam in northern Kachin state threatens to overshadow Xi's visit. As vice-president in 2009, Xi signed off on the Myitsone dam with Myanmar's then-military junta.
But widespread public anger brought the project to an abrupt halt two years later in an affront to China.
The $3.6 billion dam would flood an area the size of Singapore and critics warn of irreparable damage to the Ayeyarwady River.
Inching towards restarting the project would be "catastrophic, counter-productive and unpopular" ahead of Myanmar elections later this year, said Horsey.
Once a vocal opponent of the dam, Suu Kyi last year called on people to reconsider their opposition.
Chinese Vice-Foreign Minister Luo Zhaohui last week cryptically said the two nations remained in "close communication" on the issue.
But anger still permeates local communities. Ndau Pri, 60, who was shunted from her home 10 years ago by early construction work, still cannot return as the project has not been definitively cancelled.
"They don't care about us," she told AFP, gesturing to the infertile ground around her new village. The Xi visit is also to "show support to Suu Kyi in the context of the Rohingya crisis", analyst Yun Sun said.
Suu Kyi's reputation in the West lay shattered even before she defended her nation against genocide charges at the UN's top court in The Hague last month.
Luo, the Chinese Vice-Foreign Minister, focused on extolling China's role in mediating between Bangladesh and Myanmar over the Rohingya. China plays a shadowy yet influential role behind the scenes of other festering conflicts with rebel groups, particularly on the countries' shared border.
The economic corridor will cut through mountainous areas of Shan state, where a dozen insurgent armies and hundreds of militia forces are based. Local media reported a Chinese envoy this week even visited key militant groups to warn them not to undermine the summit.
Xi will meet both Suu Kyi and powerful army chief Min Aung Hlaing to deepen ties.From Rakhine fishermen to Kachin farmers, hearts and minds in Myanmar, however, are far from won. "China could again become the bogeyman, seen as the existential threat to the country," Horsey said.