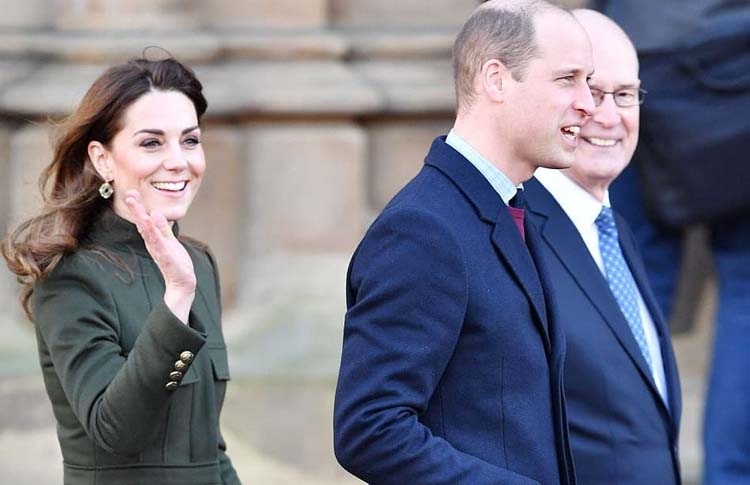 Prince William and the Duchess of Cambridge smile as they arrive for the engagement in Bradford Wednesday. -Photo: Agency
The Duke and Duchess of Cambridge were cheered wildly with Kate hugging their 'noisy' supporters on Wednesday on their first joint engagement since Prince Harry and Meghan Markle quit as senior royals.
William and Kate both grinned as they were swamped by well-wishers as they put on a tactile performance outside Bradford's City Hall. Fans including dozens of school children handed the couple bunch-after-bunch of flowers and William gave his wife a single white rose as they got back to  royal business amid the turmoil caused by Harry and Meghan's abdication crisis.
At one point the screaming crowd was so loud the Duke beamed and said to a group: 'Hello! You're the noisy corner - You're in fine voice', sparking squeals of excitement from some women waving Union flags and clutching bouquets for him and his wife.
William and Kate visibly enjoyed their warm reception in Bradford as the storm over Harry's decision to leave Britain for Canada rumbled on and rumors of their rift with the Sussexes.

The couple had first visited a community project that aims to strengthen bonds between grandparents and grandchildren in the West Yorkshire city. The destination will raise eyebrows due to the upset caused to the Queen who was forced to agree to let her grandson Harry emigrate to Canada with Meghan and Archie this week.

After meeting excited crowds in Bradford's Centenary Square, the Cambridges headed to British Asian restaurant chain MyLahore where Kate giggled as she made and drank a Kulfi milkshake while her husband knocked up a mango lassi, which he called 'delicious' as he took a sip.

After excited scenes in Bradford's Centenary Square, the Duke and Duchess arrived at MyLahore's flagship restaurant in a navy blue Range Rover.

Small crowds cheered as they got out of the vehicle and a group of children waved Union flags from their pushchairs.
The couple were greeted by restaurant CEO Asghar Ali and managing director Shakoor Ahmed.