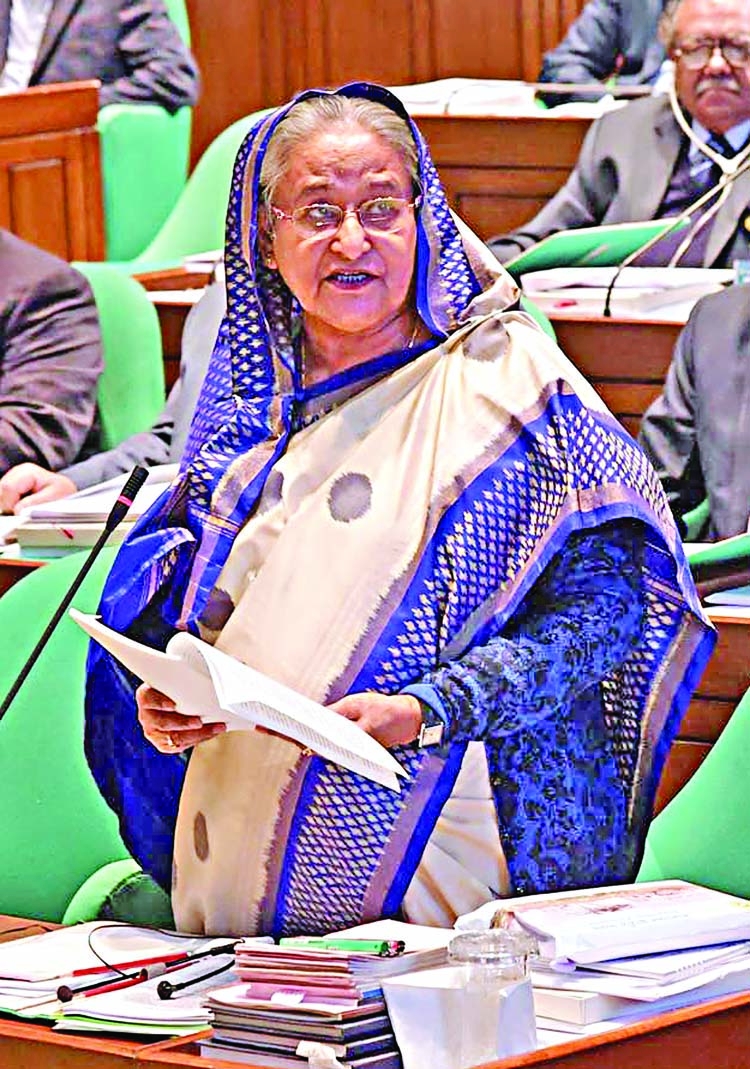 Prime Minister Sheikh Hasina speaking in the Parliament during her question-answer session on Wednesday. -PID
Prime Minister Sheikh Hasina on Wednesday said there is a possibility that 4 crore (40 million) people of 70 upazilas in the country's 19 districts might be displaced due to climate change.
"The average temperature of Bangladesh has increased by one degree in May and 0.5 degree in November in recent times due to the climate change," she said while replying to a query from Awami League MP Shahiduzzaman Sarker in Parliament during her question-answer session.
The Prime Minister said saline water of the sea is now entering 100 kms into rivers during the summer following the impacts of climate change, reports UNB.  "The average rainfall has increased. Especially, excessive rainfall in a short time causes waterlogging in town areas.
The trend of cyclone in the Bay of Bengal has also. The rough sea has caused adverse impacts on the livelihood of fishermen," she said. Sheikh Hasina also said the environmental balance has also been affected due to climate change. "That's why we don't see any variation among different seasons as in the past."
"As a result, it has put an impact on our biodiversity and we see negative impacts on agriculture and livelihood of farmers. This has posed a threat to our farm production and food safety," she added. The Prime Minister
also said there is an outbreak of different diseases carried out by insects due to the climate change.
She described her government's various measures, including formulation of Bangladesh Climate Change Strategy and Action Plan, to increase the national capacity to fight the impacts of climate change.
Sheikh Hasina also said her government has taken a programme to plant 1 crore trees in 2020 across the country to mark the birth centenary of Father of the Nation Bangabandhu Sheikh Mujibur Rahman which will play a significant role in curbing global greenhouse gas emissions.
In reply to a query from AL MP Anwar Hossin Khan, she said there are total 40 transponders in Bangabandhu Satellite-1 and it is expected that $1 million-1.25 million might be earned per year from each transponder according to the present market price.
Responding to a question from AKM Rahmatullah, the Prime Minister said through celebrating Bangabandhu's birth centenary during the 'Mujib Borsho', it will be possible to spread his life and work in the international arena. "Through this, the people of the world will be able to know Bangabandhu's sacrifices and life in a newer way," she said.
She said Unesco decided to observe 59 proposals for 2020-21 and the celebration of Bangabandhu's birth centenary is one of them. "They didn't take the decision considering Bangabandhu as a political leader, rather as the symbol of realizing people's rights. They especially considered continued struggle and sacrifices of Bangabandhu during his lifetime."
"Through Unesco's decision to celebrate Bangabandhu's birth centenary, the event has taken an international form and under the supervision of Unesco, the entire world will observe the event through various programmes," Sheikh Hasina said.She said the history of Bangabandhu's long struggle and sacrifices for the Bengalee nation and Bangladesh will be opened up to the whole world.
Replying to a query from ruling party MP Abdus Salam Murshedy, the Prime Minister said the programs to celebrate Bangabandhu's birth centenary have been cut for the sake of proper implementation although huge proposals have been received from government and non-government organizations, and individuals. "Those who made the proposals can observe their own programs that are not included in the central work plan," she said.
Expressing her feelings about the celebration of the birth centenary of Bangabandhu, who is also his father, Sheikh Hasina, while replying to a question from ruling party MP Shahiduzzaman Sarker, said after the August 15, 1975 carnage, an environment was created in the country where it seemed that Awami League would never come to power again, let alone the celebration of Bangabandhu's birth centenary.
"But I want to express my gratitude to the people of Bangladesh and the Almighty Allah for giving us the strength and the scope," she said.The Prime Minister also mentioned that she is very much fortunate that Awami League is in power in 2020 and for that it got the chance to celebrate Bangabandhu's birth centenary.
"There's nothing more fortunate than celebrating this. The people of the country gave us that scope. This is a matter of good luck for me and my younger sister Sheikh Rehana. I can't express these feelings in words," she said.