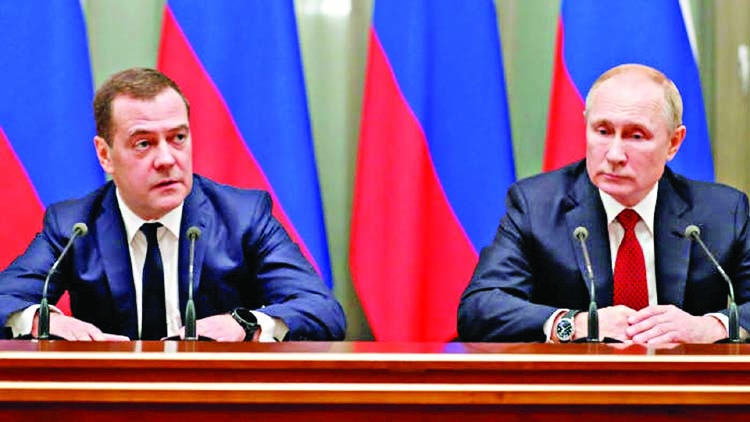 Prime Minister Dmitry Medvedev and President Vladimir Putin
Prime Minister Dmitry Medvedev of Russia abruptly resigned on Wednesday, shortly after his political patron, President Vladimir Putin, sent the country's political elite into a swirl with proposals for sweeping constitutional changes that could extend his hold on power for many years.
Medvedev's Cabinet also resigned.
In a statement issued by the Russian news agency Tass, Medvedev, a lawyer who has known Putin since they worked together in St Petersburg in the 1990s, linked the unexpected resignations to an overhaul put forward earlier Wednesday by Putin.
Putin proposed amending the Russian Constitution to expand the powers of Parliament and a body called the State Council, which currently carries little weight.
Medvedev said those moves would "introduce significant changes" to "the balance of power" between the executive, the legislature and the judiciary. Putin named him as deputy head of the Kremlin Security Council, a powerful body that includes defense and security officials.
It was not immediately clear whether the resignations signaled a rift at the top of Russia's hierarchy or were part of a coordinated but as-yet-unclear plan by Putin to reshape the political system.
Putin described the proposed constitutional changes in his annual state of the nation address as an effort to enhance democracy. They would be the first major overhaul of Russia's political system since 1993, when the country's first democratically elected president, Boris  Yeltsin, sent tanks into the centre of Moscow to subdue a rebellious legislature and then ordered a referendum to endorse a new constitution.
Putin has a long record of wrong-footing friends and foes, and he has ensured that he has remained the arbiter on all important decisions in Russia since Yeltsin resigned on Dec 31, 1999.

The Constitution limits a president to two consecutive terms, meaning that without a change, Putin would have to step down in 2024.

Putin, who has hinted at staying in power beyond 2024, could be planning a similar move, becoming the prime minister at the helm of a newly empowered Parliament, or head of the state council.