Outgoing Iraq PM says US troop ouster up to next government 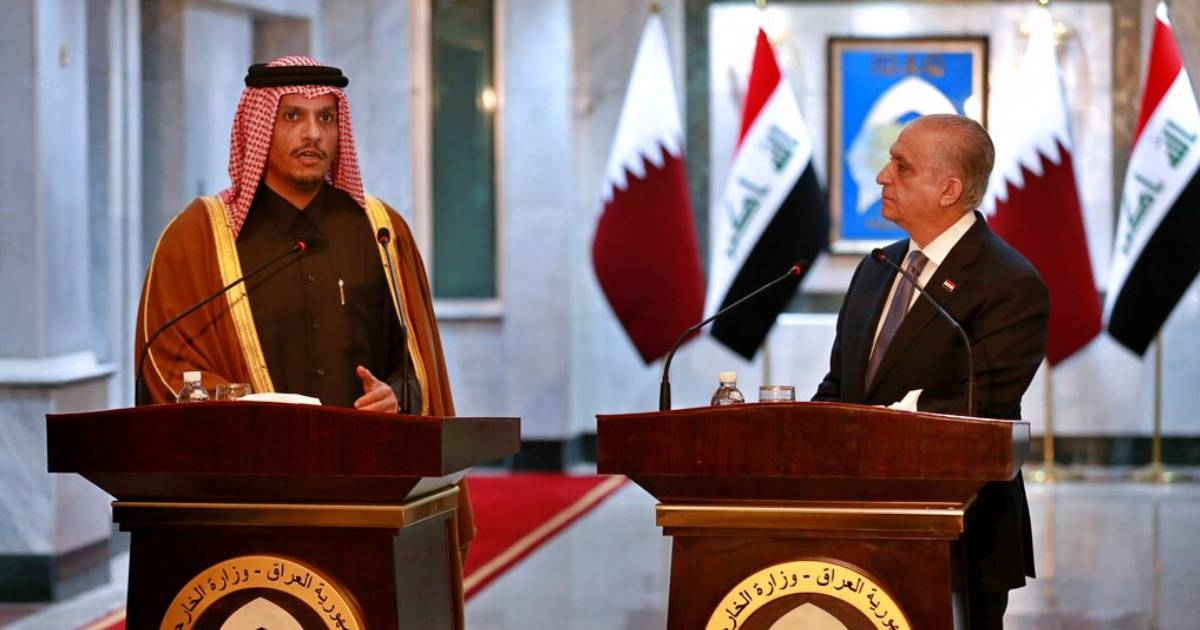 Iraq's outgoing prime minister said Wednesday it was up to the next government to see through parliament's decision to oust U.S. troops.
Prime Minister Adel Abdul-Mahdi's comments came ahead of planned protests against the American military presence in Iraq called for by an influential Shiite cleric.
Washington has responded to Iraq's requests to initiate troop withdrawals with blunt refusal. And on Wednesday, U.S. officials said the U.S. military is resuming operations against Islamic State militants in Iraq and is working to soon restart training Iraqi forces. The officials spoke on condition of anonymity to discuss decisions not yet made public.
Meanwhile, Qatar said it was seeking to play a mediating role amid escalating tensions following a U.S. drone strike that killed a top Iranian general in Baghdad.
Abdul-Mahdi's government is in caretaker status following his resignation in December under pressure from mass demonstrations.
"I request that the president, parliament and political parties nominate a new prime minister, a new government that has full authority because these difficult, complicated circumstances, especially with pulling of the troops ... that needs a government with full authority so it can go forward," Abdul-Mahdi said in comments aired Wednesday from a Cabinet session the previous day.
The U.S. strike prompted Iraq's parliament to pass a non-binding resolution requesting the government end the presence of American troops in the country. Abdul-Mahdi has stood by the resolution despite signs of de-escalating tensions between Washington and Tehran. Iran retaliated for the killing by hitting two military bases hosting U.S. troops but did not cause casualties.
Last week, Abdul-Mahdi asked U.S. Secretary of State Mike Pompeo to work out a road map for an American troop withdrawal, but Washington responded saying the two sides should instead discuss how to "recommit" to their partnership.
Abdul-Mahdi's recent remarks suggest he is keen on maintaining good relations with Washington yet firm that U.S. troops must leave.
"I am determined to keep our friendships with all. They all helped us, they all scarified for us, some with blood, some with financial aid in fighting (the Islamic State group)," he said.
"We also respect the parliament's decision and we are working on implementing it in the right manner that guarantees Iraq's sovereignty."
Meanwhile, followers of influential Shiite cleric Moqtada al-Sadr acted on his call for "millions" to take to the streets to demonstrate against the American troop presence by announcing planned protests to take place next week, according to a statement circulating on social media verified by two activists. The protests are expected to take place on Jan. 24, according to the statement.
The cleric, who also leads the Sairoon bloc in parliament, derives much of his political capital through grassroots mobilization.
Activists in Tahrir Square, the epicenter of a four-month anti-government protest movement, said they feared the demonstrations would spark clashes.
"We are afraid that he will decide to start the protests in Tahrir," said Mustafa, an activist who gave only his first name fearing reprisals. "In this case there would be big issues with the Tahrir demonstrators."
Meanwhile, Qatar's Foreign Minister Mohammed bin Abdulrahman al-Thani, said the Gulf country was making contacts with regional and international countries in order to de-escalate regional tensions. His visit to Iraq comes days after Qatar's Emir Sheikh Tamim bin Hamad al-Thani visited Tehran.
"Qatar, together with some friendly countries, is trying to decrease tensions. We have made international contacts for more consultations with our brotherly and sisterly countries," al-Thani said in a joint press conference with Iraq's Foreign Affairs Minister Mohammed al-Hakim.
Al-Thani met with Iraqi Prime Minister Adel Abdul-Mahdi and President Barham Saleh later Wednesday.
"We discussed ways of decreasing tensions in our region and we have our common efforts and joint efforts together with our friends in Iran and America and our talks," said al-Hakim.