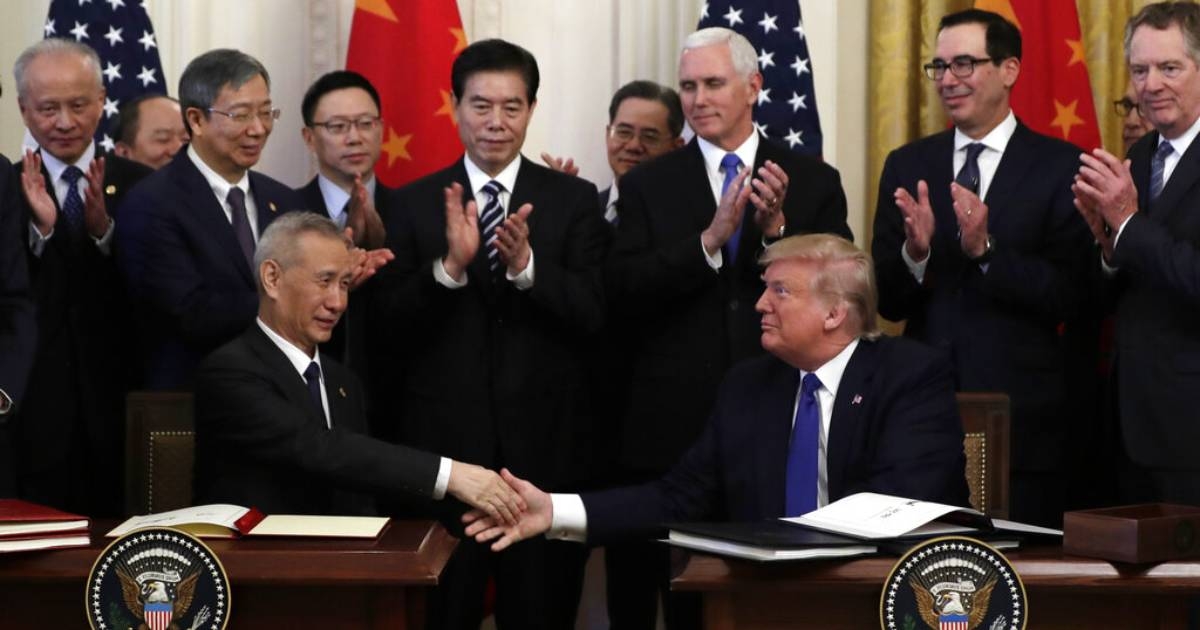 The United States and China signed an initial trade pact Wednesday, easing tensions between the world's two largest economies.
A look at  highlights of the 86-page deal.
U.S. EXPORTS: China agreed to increase purchases of U.S. services and manufactured, energy and farm products by $200 billion this year and next. The arrangement means that China is supposed to buy $40 billion a year in U.S. farm exports. It's an ambitious goal. China has never bought more than $26 billion in U.S. agricultural products in a year.
TARIFFS: The United States dropped plans to extend tariffs to an additional $160 billion worth of Chinese imports. That move, originally scheduled for Dec. 15, would have extended the tariffs to just about everything China ships to the United States. The U.S. also cut in half, to 7.5%, the U.S. tariffs on another $110 billion in Chinese goods. Still, the U.S. maintains tariffs on $360 billion worth of Chinese imports, nearly two-thirds of the total. It's a figure that would have been unthinkable before President Donald Trump took office and took a far more aggressive approach to China and trade. It is unclear what China is going to do with the retaliatory tariffs it has imposed on U.S. products.
TECH TRANSFERS: China pledged to stop forcing U.S. and other foreign companies to hand over technology as the price of admission to the Chinese market. Any transfer of technology must be made for business reasons and not be coerced. Still, China has sworn off forced technology transfers before.
INTELLECTUAL PROPERTY: The agreement makes it easier to bring criminal cases in China against those accused of stealing trade secrets. It includes provisions designed to stop Chinese government officials from using administrative and regulatory procedures to ferret out foreign companies' trade secrets and allowing that information to get into the hands of Chinese competitors.
The deal also requires China to come up with procedures to "permit effective and expeditious action'' to take down websites that sell pirated goods. China also must make it possible for e-commerce sites to lose their licenses for "repeated failures to curb the sale of counterfeit or pirated goods.''