We're busy with mass contact and BNP with rumors: Taposh 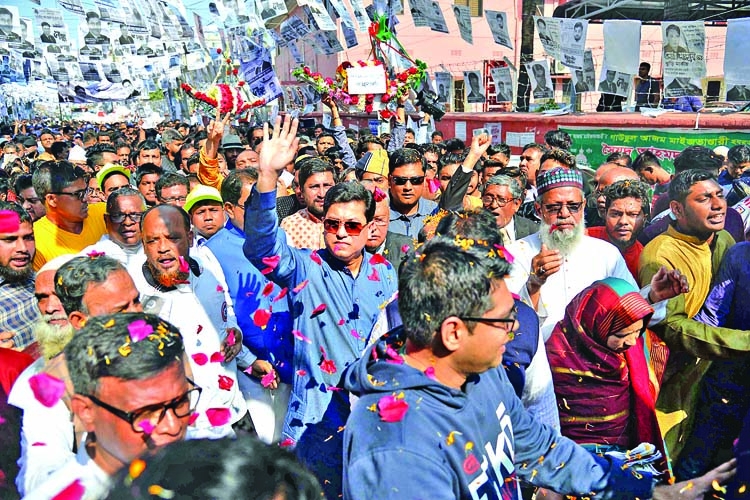 Sheikh Fazle Noor Taposh is seen during an electoral campaign in city's Fulbaria area on Friday. -AA
Ruling Awami League's mayoral candidate for the Dhaka South City Corporation (DSCC) Sheikh Fazle Noor Taposh has bashed opposition BNP for 'rumor-mongering'.
"We're busy with mass contacts while they (BNP) are busy with spreading rumors," he said while conducting electoral campaigns in front of the Central Veterinary Hospital in city's Fulbaria area on Friday.
Taposh, who resigned as the member of parliament for Dhaka-10 after being selected for Awami League's mayoral candidate, expressed optimism about the victory in the polls scheduled for Jan 30.
"We're conducting mass contacts in a very fair environment and we left no scope for any violations in the electoral code of conduct.
There is a festive atmosphere between leaders and people. Inshallah our victory is sure," he said. "Maybe I am the only mayoral candidate who has thought of the heritage of the capital Dhaka and outlined specific development plans."
Confirming his love for Dhaka, he said, "The five basic plans we listed will return Dhaka back to its former glory." We hope to revive the culture, heritage and build a better capital by restoring it back to its glory days, he added.Leaders and activists of Awami League were present along with Sheikh Fazle Noor Taposh during the briefing.