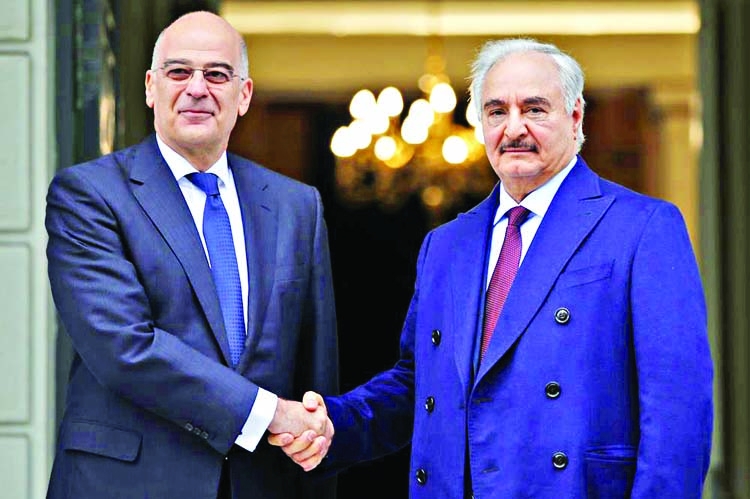 Libyan Gen. Khalifa Hifter and Greek Foreign Minister Nikos Dendias shake hands before their meeting in Athens, Friday. -AP
The commander of forces fighting the UN-supported government in war-torn Libya has begun meetings in Athens in a bid to counter Turkey's support for his opponents.
Libyan Gen. Khalifa Hifter met with Greek Foreign Minister Nikos Dendias after arriving for a previously unannounced visit late Thursday. He will continue meetings with Prime Minister Kyriakos Mitsotakis on Friday as well as with other senior Greek officials.

The surprise visit by Hifter takes place ahead of a weekend summit in Berlin aimed at halting the conflict in oil-rich Libya which is being fueled by competing international support for the warring sides.
Turkey, which has promised to send troops to back Libya's government against Hifter's offensive, is at odds with Greece over oil-and-gas drilling rights in the East Mediterranean.
In November, Turkey and Libya signed a controversial maritime boundary deal in the East Mediterranean in opposition to earlier agreements that include Greece, Cyprus, Egypt and Israel.
Prime Minister Mitsotakis, who was not invited to the summit in Berlin, has warned that Greece will use its veto powers as a European Union member to try to block a Libya agreement unless Turkey's maritime deal is canceled. Police maintained a heavy security presence outside the hotel next to parliament in central Athens where Hifter is staying.
---AP, Greece